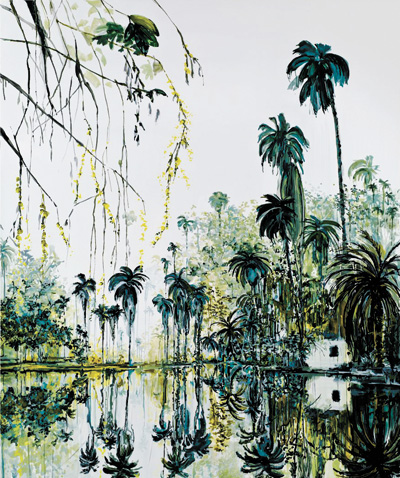 Drive down almost any Los Angeles street, and you're sure to find an eclectic mix of architectural styles--Tudor, Mediterranean, Colonial and Modern--shaded by an equally sundry assortment of trees: eucalyptus, palm, orange and magnolia. None of which are native to the city, yet each have become ingrained in our experience of it. Los Angeles artist Kirsten Everberg is acutely aware of the hybrid of cultural imports that have come to define the Southland, and eager to question our casual acceptance of it. "That nobody questions the existence of the Chateau Marmont right in the middle of Sunset Boulevard," she says, "I think is so interesting."

Standing in the middle of her recent exhibition at 1301PE in Los Angeles, the artist speaks of the motives underlying her approach. "My choice of subject matter usually has to do with the way a space resonates the multiple histories it contains, and the various ways in which space is constructed, translated and interpreted." This was evident in her 2003 series of paintings of White House interiors. In these works, it was not the formality of the rooms, nor the ornate qualities of the individual bric-a-brac that fascinated the artist, but how these individual elements, along with the projections of popular culture, generated a certain atmosphere. "How a particular place is designed in such a way can create a construction of how we might think an event might take place..." she explains. "And it might not be anything like what we think."

In her latest body of work, Everberg turns her eye onto her native city, to reflect how it, in turn, has been used to "talk about different places." Just inside the entry of the exhibition, three large-scale landscape paintings exemplify her thesis. The titles of the individual works Congo, Dutch East Indies, and Burma conjure their own distinct blend of the exotic and the colonized. The works seem to echo one another, sharing similar compositional elements and a cool, earthy color palette. However, these paintings are not of their namesakes, but rather composite images assembled from an assortment of source photographs, including some taken by the artist at the nearby Los Angeles Country Arboretum and Botanical Garden. "In many ways, you are looking at the same view in each work," she says. "They all contain an image we can relate to as real, and a version of that reflected in the water. To some degree, one is stable, one is less stable."

The sheer tactile beauty of the surface of Kirsten Everberg's enamel paintings seem hard for even the artist to resist, as she describes her process of building up the shiny layers of pigment. "I just want to touch it," she says with a laugh as she moves her hand a mere breath over the canvas. The drips and pools of paint overlay and coalesce with one another to create images that are at once abstract and representational. Yet the titles of the works instantly remove the viewer from their Southern California inspiration to a more exotic clime, and point to how easily the artist creates the illusion of remote geographic locations.

Throughout the exhibition, Everberg's lush landscape vistas are countered by exterior hotel views of Hotel Royale, China, Military Hospital, Great Britain, and Los Angeles 2015 that, like the gardens, are remarkably similar despite their claims of geography. Although these works bear a somber color palette, lack of any true vegetation or signs of human activity, they provide a fertile viewing experience. The twist and turns of the hallways accentuated by ornate rod iron banisters, depicted in the artist's trademark painterly spools, are the result of composite collage, and leave the viewer ungrounded despite the strong pull of the perspective lines. "It doesn't add up. You can't situate yourself in any one space with certainty," Everberg observes. "There is always something destabilizing the experience." Which is, perhaps, the truest reflection of Los Angeles any artist could create.

An upcoming solo exhibition "Kirsten Everberg: Looking for Edendale," will be on view at the Scottsdale Museum of Contemporary Art, in Scottsdale, AZ. October 29, 2011-January 8, 2012 www.smoca.org