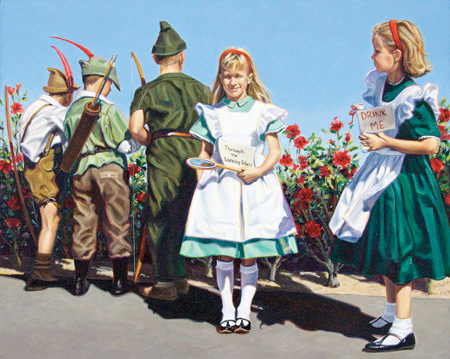 Venice-based painter DJ Hall has made a career of parlaying the ideal Southern California lifestyle into picture-perfect canvases. The most easily identifiable examples often find their attractive female subjects--friends, acquaintances and even paid models--luxuriating poolside, perfectly at ease in their large-brimmed hats, big sunglasses and nary a care in the world. Often situated at her sleek, midcentury Palm Springs-area retreat, Hall's color-saturated paintings offer the intense blues that she sees in the clear desert sky. The chiseled Santa Rosa Mountains and stately palm trees become her serene backgrounds. Part reality, part fantasy, Hall's pictures hark to treasured moments that the 60-year-old artist recalls from her childhood, when family life was more complicated than the sundresses and smiles she depicts in "Kodak Moments: Portrait of a Los Angeles Artist in the 1950s," her first solo exhibition since "DJ Hall Thirty-Five-Year Retrospective" at Palm Springs Art Museum in 2008.

More literal than the paintings exhibited in her retrospective, Hall's new work again finds the artist in her happy place, recalling--and revising--scenes from her postwar Southern California childhood. But, she observes of the current series, "This is the most narrative work I've done." The new paintings draw decidedly from old family photographs, but they add new information, such as fresh backgrounds. Some--including the 60-by-74 inch oil on canvas, Little Girl Go (2011)--include captions, giving them the feel of an old-fashioned childhood primer. This example reads, "Look! Look and see! See Debra Jane in the little red car. See that little girl go!"

"Everything I do is about generations," she intones, referring to a piece that captured the imagination of collectors and art-walkers at the September 10 opening. In this particular picture, Hall cast herself as child, mother and grandmother--at first an unsettling notion, but ultimately successful in encapsulating so much of what the artist had hoped this show would communicate: optimism, timelessness and beauty. Over the years, Hall achieved this by repeatedly employing the same, graciously aging models--who, incidentally, have included a museum curator and one of her former dealers--who personify the artist's ideas.

Hall, who teaches figurative drawing at Otis College of Art and Design in Los Angeles, is an uncompromising perfectionist. She is a realist painter who uses photography, but hardly a traditional photorealist. In her earlier work, she dressed, styled and choreographed every detail--and then sketched and mixed and matched elements from her photo shoots, trading an arm or a face from one image to another, to compose idealized pictures. "My approach is very detail-oriented," she says, noting that she adds and deletes background elements to simplify or clarify the composition. "I create my own reality, fantasizing about family and things."

To some viewers, the sharp light that Hall shines on the subjects in the works preceding "Kodak Moments" exposes a colorful commentary on affluence, indulgence, and eternal youth. To others, it illuminates simple pleasures, which Hall learned to appreciate about 15 years ago while persevering through excruciating physical pain and therapy to overcome Lyme disease. Truth lies in both views. Painting remains as therapeutic to the artist as the desert itself. "[The desert] is bright and it makes me happy," she says. "There's enough bad stuff in the world. I want to be positive."

Hall offers a sweet nod to the 1950s through her love affair with the idyllic backyard pool at her grandmother's house, where she celebrated so many birthdays. She mines imagery from her own childhood, and also presents a recognizable Americana--an era for which she longs in the face of today's overwhelming, 24-hour news cycle. "I feel secure in the desert," she explains. "It's nice to take in your setting through the process of painting or drawing. Having that memory is a good feeling."