How to Activate a Storefront Window
Editors’ Roundtable
Column by David S. Rubin 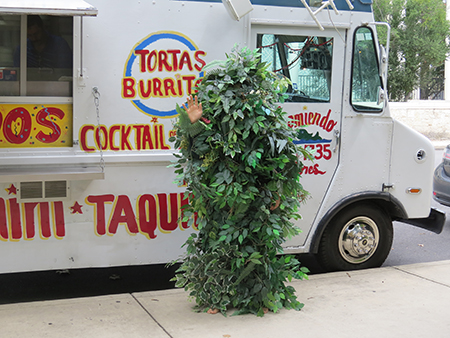 Although primarily known for its highly acclaimed artist residency program, through which guest curators select an international, national, and Texas-based artist to create and exhibit new work, Artpace has also been presenting ongoing installations in the storefront windows of its facade for more than a decade. Perhaps one of San Antonio's best kept secrets, the "Window Works" program has become a prestigious showcase for artists who live in or within close proximity to San Antonio. Unfortunately, in that San Antonio is largely an automobile-culture city, few beyond the die-hard contemporary art community are even aware of the program's existence. For unlike the New Museum's window installation program that lasted from the late 1970s through the 1990s, and which benefitted from being located in New York City's pedestrian-dominated environment, Window Works must address the greater challenge of capturing the potential drive-by audience, as well as of enticing others to make a special trip to see what is going on.

Granted, getting everyday folks to drop what they are doing to go look at contemporary art is always going to be an uphill battle in most American cities.  Nevertheless, there are a handful of artists who have succeeded in creating work that is worthy of everyone's attention by pushing the boundaries, that is, by activating Artpace's Main Street windows to the point that they functioned beyond merely serving as a storefront display case.  And I think the main reason that those I shall mention stand out above others is that they all incorporate the element of time into their work and thus invite multiple viewings.

The first to achieve such a feat was Andrea Caillouet, whose 2007 installation, “Drive," was an effective transformation of the windows into something other than a surface for signage or a transparent plane through which to look. In the hands of Caillouet, the windows became a time-based artwork that was silent by day and active by night.   Relating the work thematically to the drive-by traffic of the locale, Caillouet frosted the windows, leaving a series unfrosted areas shaped like automobile windows. During the evening hours, these shapes were brought to life by video projections of vistas of Americana as seen through the windows of moving cars. Incorporating aspects of time, movement, and luminosity, these windows within windows infused an unexpected and mesmerizing organic life into the ordinarily static glass.

Mark Hogensen similarly opted in 2008 for something time-based, and added a human presence into the equation. Like Caillouet, Hogensen completely altered the glass surface for his installation "Home/Work." Using a plywood screen and sheaths of translucent fabric, Hogensen created an allover black-and-white abstraction, with linear overlapping shapes referencing a cluttered interior setting. During the day, the silhouettes of Artpace staff members would be captured on the fabric as they moved about their daily business.  At night, they were replaced by video projections of people performing ordinary domestic activities. The windows thus became a splendid hybrid of life behind a window shade, cinema verité, and video animation.

More recently, an interest in optics and perception led Stuart Allen and Cathy Cunningham-Little to take advantage of the true experimental nature of the Window Works program. For his 2009 installation, “Parallax," Allen employed an uncommon print format known as a parallax panoramagram, which consists of two sheets — one housing images broken up into vertical strips and the other a barrier layer with a repeating pattern of thin, opaque lines. When viewers approach this type of print from different points in space, the printed image appears to have been set in motion. When Allen suspended three large parallax panoramagrams printed with a dark silhouette of a human figure between the windows and a curving white wall, the effect was something akin to a shadowbox theater. Cunningham-Little, on the other hand, has been experimenting with physical light. Her 2014 installation, "Within the Angles of Incidence," was composed simply of glass, wood, a motor, and white LED lights, which were centrally positioned within the Artpace windows. Functioning somewhat like a flower moving through a complete life cycle, the installation would begin each morning barely visible within the daylight, and then at night transform into an array of luminous beams of colored light in movement, only to return by dawn to its cocoon to be reborn anew.

Of all the installations I have seen in Window Works, my personal favorite was Judith Cottrell's 2012 project, "In the Window." Although she is an accomplished draughtsman whose drawings are obsessive, intricate and often breathtaking, Cottrell did an about-face for her installation and collaborated with a computer programmer to create drawings directly on the windows using a software programmed "drawbot" machine. The robotic drawings, which mimicked Cottrell's own style, were considered "durational" in that they took shape gradually. Viewers had the pleasure of watching them progress over time.

"Durational" is a term also employed by current Window Works occupant Jimmy James Canales.  An adventurous young performance artist who cites Chris Burden, Tehching Hsieh, Marina Abramovic, Disney World, and reality television as major influences, Canales is using the windows for what he describes as "an evolving durational performance." Over the four-month run of the exhibition, Canales will be creating a continually changing installation and performing all the while. Adding a new dimension to Window Works, Canales is actually taking the program to the streets and social media, and in this respect ironically emerges as the strongest advocate to date for the program. When I visited him during the first week of his installation, he was dressed completely in leaves (to camouflage himself within the jungle environment he installed behind the window), posing for pictures in front of the taco food truck that has become a favorite lunch spot for locals on Fridays. In addition, he is documenting the project as it happens using Facebook, Instagram, Twitter, and jimmyjamescanales.com.