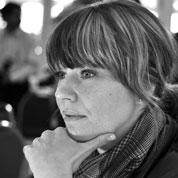 At 17 years old, early acceptance to UC San Diego provided Martin with access to top art professors, such as Kim MacConnel, Ernie Silva, and Eleanor Antin. MacConnel (known for infusing high abstraction with kitsch decoration) immediately recognized a sophistication in Martin's early paintings he considered above the work of graduate students. A decade later, MacConnel continues to respect Martin's sensibility demonstrated by his 2010 San Diego emerging artist prize nomination for Martin. Applauding her ability to break the rules, he notes that Martin's "canvas space, while flat, opens up almost three dimensionally and in ways that skew balance, proportionality, and composition." In turn, Martin appreciates MacConnel's support for "work that was tongue in cheek and funny to me."

Martin's early developed ability to experiment with color, line, and shape result partly from her background in computer illustration for comic book companies. Although a full time college student, she worked full time applying color for DC Comics. The clean, controlled brush work and highly saturated color found in Martin's paintings are directly associated with this experience. Martin acknowledges, "technology has affected the way that my hand, eye, and brain work because I spent a lot of time at a computer with my hand making shapes and color. You have to be precise with your hand. It's not real color--it's the color on the computer, instant and artificial with clean lines precise down to the pixel." She observes we often "conform to technology as opposed to technology conforming to us."

Despite this background, Martin consciously pursed painting in the face of an art environment dominated by new media. "I wanted to be making a painting, because it slows things down and brings back the human element in the making and in the looking. I wanted to be able to one day make a painting that's interesting and engaging and will compete against whatever is the flashiest loudest thing." Martin is equally effusive when discussing the physical and perceptual experience of painting. She describes staring at her work from an inch away, "the way the colors interact and are bouncing off each other. That's all you are taking in for so long and then you look away and everything else...is different and skewed." Yet, when pressed to discuss specifics behind the scenarios she draws from she balks arguing that it would "kill the experience." Since Martin first took advantage of UCSD's renowned cognitive studies program a decade ago, she continues to be interested in "how we respond to stimulus and different interfaces in the world"--painting reminds us that the brain is a physical organ and that our bodies are systems with reactions that cannot always be controlled.

"Here Not There: San Diego Art Now" runs through September 19 at Museum of Contemporary Art San Diego in La Jolla. CA. In September, Heather Gwen Martin will be the subject of a solo show at Luis De Jesus Los Angeles, at Bergamot Station in Santa Monica. www.luisdejesus.com