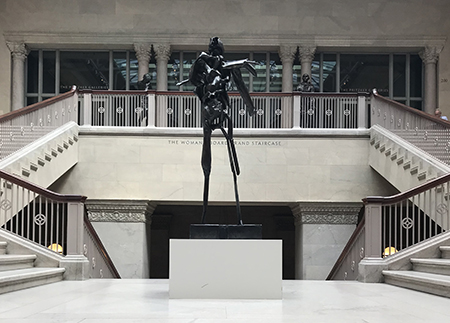 Richard Hunt’s figurative assemblage in the primo spot midway up the grand staircase at the entrance of the Art Institute of Chicago recently got me thinking about how so many African American artists have successfully deployed the bric-a-brac of everyday materials in their work. David Hammons show on the West coast (Hauser & Wirth) and Nari Ward’s on the East (The New Museum, it also traveled to the Contemporary Arts Museum Houston) bookend a deep history of found object work by such artists as Betye Saar, Melvin Edwards, John Outterbridge, Theaster Gates, Shinque Smith, Nick Cave, Rashid Johnson, Sanford Biggers, and many others whose genealogy in regards to the found object could use some scholarly unpacking. But let’s start here with the Hunt.

“Heroic Construction” (1958) replaced a previous standing figure by the French sculptor, Aristide Maillol. Maillol’s buxom beauty, “Enchained Action” (1906) used to reside at this august site as a traditional homage to the museum as a place for sensual respite. While I’m all for promoting sensorial consciousness, it irritated me that for years a naked woman (truncated without a head no less!) welcomed viewers into the Art Institute. Promoting the masculine gaze at the institutional level has surely become passé, so it was with great relief that a few years ago a new centurion, one less curvy, met museum-goers as they passed into the hallowed halls of high art.

Made just after graduating from the School of the Art Institute of Chicago in the 1950s, Hunt’s “Heroic Construction” aligns with an American fascination for assemblage at a time that coincided with Robert Rauschenberg, John Chamberlain and Lee Bontecou, among others.  Richard Stankiewicz was the closest to Hunt in terms of assembling actual figures out of metal detritus, rather than the general abstractions of most of the others. His “Middle Aged Couple” (1954), down the street at the Museum of Contemporary Art, is a comic sendup whose shapes cannily represent middle-age, all constructed from the metal scraps the artist found in his backyard in New York City. Instead of Stankiewicz’s plastic witticism, Hunt bravely takes on the grand history of figurative sculpture — its heroic pedigree, as the title and form suggest. “Heroic Construction” was also made from metal scraps — old pipes and automobile parts welded together into a composite torso on long legs. Individual items are loosely recognizable, but it is the raw, brutal, terminator effect of the whole that startles. Hunt delivers the remarkable feat of turning street detritus into bold canonical form.

The artist would ultimately abandon the use of found materials, going on to make more lyrically abstract work in bronze loosely based on soaring bird motifs, among other formidable objects and themes. But this early venture into the use of found materials was prescient in that the current scene finds many black artists appropriating from material culture. Is it just that found object art is generally de rigueur and everywhere, or is it that there is something about this medium that holds resonance for many artists of color?

Years ago, in the journal “Third Text,” the artist Dawould Bey wrote about David Hammons and his possible connection with the West African Minkisi tradition (magical objects that include found bits of mirror, shells and nails). It is certainly worth considering whether the fascination with found materials on the part of so many contemporary black artists has its origin in an “Afro-Atlantic sensibility” or whether such expressions that rely on everyday things is simply a matter of telling the African American story through the cultural artefacts of black urban life. Perhaps it’s both. Objects hold memories as powerful cultural and personal signifiers. One sees this in David Hammons’ use of a cloth hoodie, Betye Saar’s inclusion of Aunt Jemima dolls, Melvin Edwards shackles, Rashid Johnson’s shea butter, Nari Ward’s collection of abandoned baby carriages, Sanford Bigger’s Gee’s bend quilts, or Nick Cave’s black lawn jockeys. These are but a few examples of the powerful metonyms that make up the disparate narratives of black experience in contemporary art.

So, it would seem that by replacing the modernist mainstay Maillol with the scrappier Hunt, the Art Institute has corrected its story in a number of ways. The museum not only removed a sexy broad as the welcoming motif, but positioned a work made from the detritus of Chicago’s streets by an African American artist who hails from that same community. Perhaps the read is that art no longer strives for universal truths, but is local in its reach for meaning. The medium is the message in Hunt’s “Heroic Construction,” for a work made from everyday things stimulates one to return to the everyday with an investigatory spirit and a renewed sense of awe. There is indeed a heroics in this and for those who have taken up the cause of showcasing how everyday black lives matter.