Our Bodies, Our Art
Editors' Roundtable'
Column by Margaret Hawkins 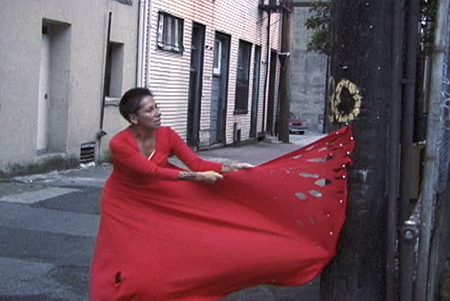 Two recent major museum exhibitions focus on women’s bodies, not exactly as object or even subject but as medium, that intervening substance through which meaning is conveyed. Necessarily, these works are by women. The bodies are their own.

Eleanor Antin’s “Time’s Arrow” at the Art Institute of Chicago records two episodes of “carving,” i.e. intentional weight loss, one from 1972, the other from 2017. In the first series of photos, we see 37-year-old Antin shed ten pounds over six weeks; 45 years later the process takes 4 months. In each series, Antin documents her gradually shrinking body by having herself photographed naked (not nude, no romance here) from back, front, and both sides, daily. In the recent series, made when Antin was 82, she added a fifth view in a bra, to show her torso, which, when braless, was obscured by her breasts.

Antin made the first series in response to an invitation to submit work to a sculpture show.  “Carving: A Traditional Sculpture” was her take on classical stone carving in which an ideal human form, “as perfect as possible given the material,” is released from a block by stripping away excess.  Michelangelo used marble, Antin carved her own flesh.

People do it all the time, women more than men. It’s called dieting. The edgy thing Antin did was to document the process and present it as art, a conscious act of making an aesthetic object. Whether doing so is also an act of shame or vanity or some toxic cocktail of both, or a wry parody of the demand that women not take up too much space, that they become smaller until they disappear, is up for discussion. Whatever Antin intended, though, at age 37 she didn’t risk much. Far more radical than the slight reshaping of an attractive, youthful body into a thinner version is Antin’s second work, which charts the inevitable descent of time’s arrow in a woman’s ninth decade.

There’s defiance here, also the kind of dark humor that springs from honesty. One thinks of Alice Neel’s self-portrait at 80. Few subjects remain taboo in Western society, especially in art, but one of them may be aging in women. We forget how attached we are to the inseparability of beauty and femaleness. Fat is one thing. The Venus of Willendorf may be bulbous but she looks fertile. Fat and old is something else entirely. But Antin doesn’t blink; she doesn’t let us, either.

Appearance and disappearance are two sides of the same coin.

Canadian performance artist Rebecca Belmore also uses her body as medium. Her retrospective at the Musée d’Art Contemporain de Montréal highlights thirty years’ work with themes of exclusion and violence against indigenous peoples in Canada. Belmore is Ojibwe and a member of the Lac Seul First Nation. Her ideas about territory and land — whose is it and how should it be used — extend to and are enacted upon and by the artist’s body. To whom does it belong? What makes women disappear? Sometimes nature is the enemy: we see her battling water, snow, wilderness. But often it’s man.

Belmore’s most wrenching video, “Vigil,” explores the plight of First Nation women and the prejudice and violence they often encounter when they leave their communities and move to cities to find work. The video documents her performance commemorating the lives of approximately fifty women, many of them sex workers, who disappeared from Vancouver in the 1980s, presumably murdered by a serial predator.

“Vigil” begins with Belmore on her hands and knees scrubbing dirty pavement on a corner in the neighborhood where many of the women disappeared, paying overdue respect to those who received none in life. Later we see her don a red dress and nail the skirt, thus herself, to a telephone pole. Later when she tears herself free, nail-by-nail, ripping the dress to shreds, we understand this violent public disrobing as a stand-in for rape, and because we watch we feel complicit. The performance ends with Belmore standing next to a pickup truck holding a bouquet. James Brown’s  “It’s a Man’s Man’s World” blasts out of a boom box. When she climbs into the passenger seat and is driven away we can’t help but wonder how many other women climbed into cars right there, only to disappear.

The rending of garments recalls Yoko Ono’s “Cut Piece,” in which she invited audience members to come onstage and scissor off bits of her clothing. First performed when she was 31 years old, Ono reprised the piece in 2003 at the age of 70. Like Belmore’s “Vigil,” it’s still shocking to watch, maybe because it doesn’t just represent violation, it enacts it, and upon the artist’s own body.

Some will remember “Our Bodies, Ourselves,” the groundbreaking paperback manual about women’s health and sexuality first published in the seventies. Books were distributed at events where girls and women were invited to watch demonstrations of cervical self-examination. The point of these radical acts of introspection was to show women how to take charge — with hand mirror and speculum — of their health and fertility. Self-examination as a form of birth control never caught on but the larger point was made. Individual girls and women, not their parents or spouses or churches or governments, were the sole owners of their bodies.

I thought of the book’s title as I walked through these two exhibitions and wondered if women still felt a need to convince themselves, and the world, of their full, exclusive rights to their bodies. Maybe it’s time for a sequel: Our Bodies, Our Art.