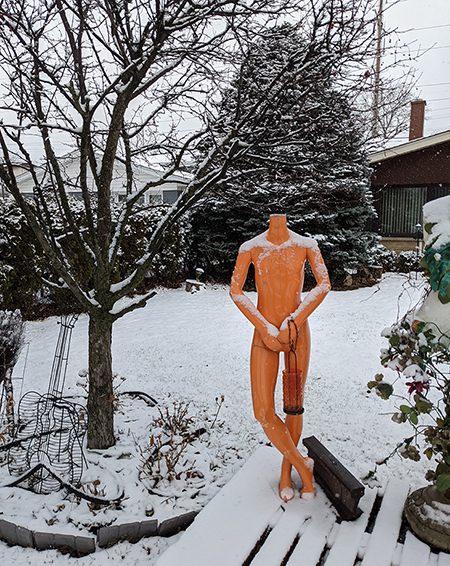 Chicago museums are closed again. I miss them, the walking and looking, the way the body in motion links to the mind and the eye. Museums grant permission to be quiet and stare at things.

Instead, every morning I walk my dog. The monotony of it is both comforting and boring. There’s nothing much to see in this quiet residential neighborhood. Or so I used to think. But boredom is the soil in which creative thoughts grow and now I look at lawns and fences the way I used to look at art.

It’s January; crèches still dot a few lawns. The little pink-coated Joseph hunched over the plastic baby at the base of a flagpole seems especially tender in the snow that blankets my neighbor’s yard. Overhead, a Marine Corps flag flutters.

A lot of front yard playgrounds have sprung up. The more interesting ones appear to be homemade. At first these seemed oddly placed and ill advised. Why hang swings and miniature hammocks so close to the street? Why not opt for the privacy and safety of a backyard? I concluded this placement was a plea for social contact for cooped-up children, but I never see kids on the equipment. Now I think these colorful dangling rings and hanging ladders are intended as presentations, expressive statements, not for play so much as about it. When I thought of it that way, I began to notice other such statements. A portable, corral-like cage appeared some days on a front lawn in the warmer months, occasionally but not always housing a large flop-eared rabbit that was lugged out on mild mornings and plopped in his octagonal world only to disappear every afternoon. Surely he benefited from the fresh air, but he could have breathed just as easily in the backyard. It seemed more like theater, and not necessarily meant for discussion. (“What’s his name?” I asked the little girl I saw once in front of that house. “Pedro,” she said as if it were a secret, and sped off on her bike.) Pedro and his portable cage disappeared when it got cold, to be replaced with a plastic reindeer. Other lawns on the same street feature effigies of Buddha, Santa, St. Francis of Assisi.

In the summer, a bookcase appeared on the front lawn of a house I’d never noticed. Small, set far back from the street, occasionally with an unoccupied mailman’s truck in the driveway, so I figured it to be the home of a postal worker. (A person of letters, I thought.) The bookcase had nice proportions and glass doors and was painted teal. A sign invited passers-by to take a book or leave one. Literary fiction and biography started to appear inside the bookcase, self-help in piles on top. Some potted sunflowers were added in heraldic symmetry. Plastic reptiles and cement trolls took up residence around the base of a tree. Every few days the display changed a little, was added to, or edited. Squirrels toppled the sunflowers and ate the seeds.

At first I thought the installation was interactive and, desperate for a little hands-on art action, I added a small plastic dinosaur I’d found at the park. The next day my addition was gone. I’d learned something about the creator. This was a curated work, not a collaboration or a dialog. Would you add a fun-sized Snickers bar to Felix Gonzalez-Torres’s “Portrait of Ross in L.A.”? The sign made it clear: add books. So I did, and I took some — Sherlock Holmes, Edgar Cayce’s “Story of Jesus.” Mostly though I browse.

As the summer progressed, I expected the person of letters would remove the display in the fall, but sunflowers gave way to pumpkins, which gave way to Christmas balls. Recently the blue bookcase, which leaked, disappeared and was replaced by a waterproof steamer trunk. Now the trunk is full of books. A sign made out of an old vinyl LP dangles from the latch. It says: Trunk Library. (The LP, by the way, is a Columbia Masterworks recording of “Hungarian Dance #5 and #6” by Brahms. Now that I think of this as art, these details feel important.)

A few days ago, a headless department store manikin — naked, mostly sexless though with a hint of femaleness, bright orange — appeared alongside the trunk, holding a lantern. This is the edgiest addition so far, making me think the artist has more up his sleeve, that the little house contains a more interesting collection than the earlier displays of cement trolls and plaster angels suggested. I want to know more, but, as in any interaction with art, I also like not being told.

One day in the fall, walking on the opposite side of the street, I caught sight of a tall man making his way down the driveway. My dog had stopped to sniff a bush. The delay allowed me to watch. The man arrived at the bookcase holding a small object. After some hesitation, he placed it, like a painter adding a crucial brushstroke. I considered crossing the street and asking the man about his project. But he was so obviously concentrating, in the midst of making something. It didn’t seem right to disturb him, any more than you would interrupt someone writing on a laptop in a coffee shop. I left him alone. But the next day, when the coast was clear, I hastened over to see what he’d added.

Postscript: One day after I photographed it, the orange manikin disappeared. As of this writing, the Trunk Library remains.