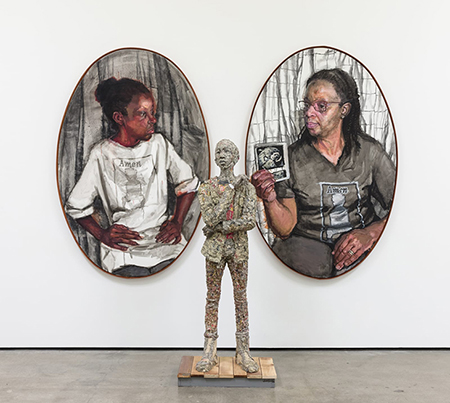 As I wrote recently about Yashua Klos' works at UTA Artist Space, I could not help but reflect on the depiction of the black body in various forms recently showing in Los Angeles. In my weekly art outings, I have noticed a predominance of figurative imagery depicting aspects of ordinary life by African American artists. It is hard not to look at these exhibitions without thinking about what connects them at this particular moment in time. Are Black painters suddenly focusing on the representation of their communities and families, or have they always done so, but galleries have shunned interest until now? In light of recent events and the numerous attacks on people of color, it is an opportune moment for these bodies to be made visible.

Over the last month I have visited these exhibitions: Amy Sherald (b. 1973) at Hauser & Wirth; Khari Johnson Ricks (b.1994) at Night Gallery; Evita Tezeno (b.1960) at Luis de Jesus; Sedrick Huckaby (b.1975) at Philip Martin Gallery; Che Lovelace (b.1969) at Various Small Fires; Willie Birch (b.1942) at Kayne Griffin, as well as “Shattered Glass,” a large group exhibition at Jeffrey Deitch. My intention here is to map out what I saw and highlight a few works of interest that may be indicative, but in no way to attempt to produce a definitive essay on Black art in Los Angeles.

Sedrick Huckaby states: "Ordinary people matter … The African American family and its heritage has been the content of my work for several years. In large-scale portraits of family and friends I try to aggrandize ordinary people by painting them on a monumental scale." Huckaby is a Fort Worth, Texas based artist who describes the works in his exhibition “Estuary” as "dealing with death in the black community, diversity in the African-American family and the continuation/continuity of life." The painted portraits depict individuals in memorial T-shirts: they are expressions of love and loss. In addition to the paintings, Huckaby also creates sculptures, often pairing these works together. For example, “Amen” consists of two large-scale oval shaped portraits. One is of a young girl and the other of an older woman. The sitters look out of their frames toward each other, both wearing commemorative T-shirts that say "Amen." In front of the paintings is a life-sized sculpture of a boy made from newspaper and wood pulp. This textured construction of the youth — which feels like the person who has passed — gazes calmly and stoically, though created from discarded materials.

Amy Sherald has also commented on her desire to paint aspects of ordinary life. Three of the five large-scale paintings in “The Great American Fact” feature African Americans at leisure. Sherald has a flat, deadpan painting style that is expressive without being fussy. These works depict people in brightly colored places and outfits, yet she paints Black skin in shades of gray. “An Ocean Away” depicts two surfers on the sand. A young boy in a black and light-green wetsuit holds up a yellow surfboard decorated with white flowers. He stands next to an older man (presumably an older brother or father) who is seated on a bright magenta surfboard. An orange-red flag on a pole rising out of the sand against a light blue sky billows behind them. It is a typical day at the beach. “As American as apple pie” presents a couple in front of a pale yellow, sloped roof house with white shutters and a green lawn. The couple, he in a denim jacket, she in a light pink skirt and darker pink T-shirt that says "Barbie,” lean against a brown vintage sedan parked on the street in front of the house. In these, as well as her other paintings, Sherald portrays her subjects as snapshots capturing a discrete moment in time against an ongoing continuum.

Evita Tezeno's mixed media collages are folksy images crafted from colorful and patterned paper. On view are both close cropped portraits and full-bodied figures with exaggerated features who often appear in flowery fields of green, a cheerful setting that contrasts with the works’ titles. While the images pay homage to artists like Romare Bearden, Tezeno's whimsical representations feel like fairytales filled with determined, loving and compassionate figures. Through evocative titles such as “The Soul Knows My Silence,” “My Dreams Make Me Who I Am,” and “My Life Tells Where I Have Been,” Tezeno evokes the plight and struggles of her subjects.

In “Feel Me?” Khari Johnson Ricks presents large-scale, painted paper cut-outs that float on the gallery walls. In these colorful depictions, Ricks combines fantasy and reality to create open ended narratives through which his figures frolic, dance and enjoy life. In “Weekend retreat” a muscular, bearded figure portrayed in day-glow green skin wearing tight-fitting shorts carries another man in his arms. The figures stand on a small patch of brown ground from which blue-green plants emerge. Their silhouettes stand in front of fragmented white clouds and darting dragonflies. The cut paper figures in “Rescue mission” are a glowing yellow. Like “Weekend retreat,” there is no background. Ricks assembles his compositions on the bare white wall. Here, a turtle moves through tall orange-yellow grass. A yellow bird hovers as the central figure gives a thumbs up while carrying another person over his shoulders. In both pieces, Ricks suggests things are OK, despite what might have happened outside the picture plane, as indicated by the title. Ricks' enigmatic works highlight a strange party/fantasy atmosphere that has been observed within these disconcerting times.

Che Lovelace is a Trinidad based artist whose vibrantly colored paintings fuse the body by turns with the landscape, architecture and even other bodies. The compositions are created across multiple panels through which Lovelace weaves narratives that span time. For example, in “Interior with Cutlass” he depicts the view simultaneously inside and outside a window. The "cutlass" of the title rests on top of a bright orange cabinet in which are placed a model of a house, jars and a ball shaped picture frame. Outside the slatted window behind it are trees. The figurative work “Man Descending Stairs Carrying Wings (to Become a Blue Devil)” is a straightforward depiction of a man wearing nothing but a thong and carrying a set of wings as he descends a stairway. Of course this homage to Duchamp is anything but straightforward. The work is broken in sections Cubistically, its colors shifting from panel to panel. Lovelace's use of color is expressive and painterly — in Fauvist-influenced style — representing the aura of Carnival that has been a central subject of his work. In the evocative “Beetham Protest,” a silhouetted figure is centered in the painting, surrounded by flames. Telephone and power lines extend horizontally across the top of the work, passing in front of stacked houses painted orange to complement the fire. In the foreground, Lovelace includes two dogs that are oblivious to the action at hand.

New Orleans based Willie Birch's drawings depict slices of everyday Southern country life. Birch focuses on what is often overlooked, elevating the banal to something significant. The drawings say, pay attention, even a coiled hose can be interesting and beautiful. Birch's works on paper are predominantly black and white (beginning in 2000, Birch removed all color from his palette), which gives them an intensity and immediacy. It is hard not to be taken with “Cat on Porch,” an acrylic and charcoal drawing of the artist's cat sitting alone on a wooden porch in front of the vertical lines of a door. The only work that includes people is “Country Funeral (Funeral for JD),” a vertical diptych drawn with photographic veracity of three people removing a coffin from a hearse. Above this scene is a line of mourners carrying the coffin and being led by a pastor who carries a prayer book. Birch's drawing style is both realistic and emotional. Although these pieces capture a specific place and time that have personal significance for Birch, they also resonate in a manner that feels universal.

“Shattered Glass” is a large international group exhibition with more than 40 artists of color. Showcased are range of styles and aesthetic points of view ranging from the subtle to the bombastic. Much of the work is figurative and celebrates the black body in myriad ways, some flattering, some intimate, some confrontational, none stereotypical.

While no definitive conclusion can be drawn from the viewing of these disparate approaches, what is significant is the fact that artists of color are being seen and exhibited at all. Until recently that was a rarity. The works I saw are personal explorations of what surrounds these artists, what plagues them and how they make sense of the world we share, but not on equal terms. Is there a difference in these presentations of Black art in contrast to explicitly political exhibitions of the past? (For example, “Black Male: Representations of Masculinity in Contemporary American Art” at the Whitney Museum in 1994.) How have times changed? Has the reception of figurative, conceptual, or even political art changed? What makes today's climate different?

The differences are clear, even stark. What cuts across lines of race, time and context is that artists communicate from the heart. The proliferation of works by artists of color currently and recently on view in Los Angeles illustrates the scope and diversity of personal experience and creativity. They constitute a collection of visions that imply no only what is but what can be.