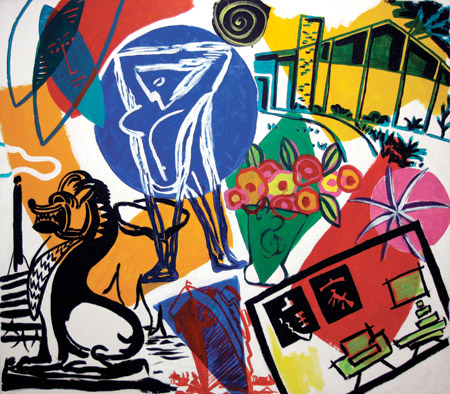 Recently retired, MacConnel has been a mainstay of UCSD's renowned visual arts department since the 1960s, evolving from student to chair. MacConnel describes his education at UCSD in the late 1960s as an extraordinary experience led by a New York faculty at a time when UCSD represented "the farthest extent of civilization." MacConnel emerged when conceptualism and minimalism were dominant. Initially excited about conceptualism's possibilities, MacConnel soon felt inhibited by it, recalling "what I was seeing at that time was a kind of academicizing and an increasing formality in the conceptual movement because of the minimalist practice." MacConnel's interest in non-Western pattern provided the means to break from conceptualism's constraints and set the stage for the Pattern and Decoration movement. Near Eastern textiles allowed him to "introduce a different kind of vocabulary" while their simple "repeated pattern played off of a kind of minimalist formulaic practice." His attraction to non-Western pattern was propelled by the late art critic Amy Goldin, who taught at UCSD in the 1970s. In 1975, MacConnel was included in the Whitney Biennial curated by the late renegade Marcia Tucker. The Biennial gave MacConnel the standing to teach at UCSD. In 1976, he experienced his first NY solo exhibition at Holly Solomon; the show was reviewed in Art and America by Goldin, who had previously written an article linking him to the Pattern and Decoration movement.

As a San Diego artist, "a long distance from LA or NY," MacConnel has had to "think twice as hard to prolong his career." In the 1980s, MacConnel was compelled to rethink his relationship with the Pattern and Decoration movement, which he describes as being steamrolled by the egos and aggression of 1980s Neo-Expressionism. But also, once the art world began to open up to artists who fell outside the white male-heterosexual norm (in part, due to Pattern and Decoration), MacConnel was in an odd predicament, explaining that "rather than someone like me saying you ought to look at these other cultures... someone else could say it with a better voice." MacConnel explains he ultimately had to "accept the fact that I was a tourist." As a result, in the 1980s and '90s MacConnel turned to travel photography and postcards, as seen in his collages and hybrid abstract-figurative paintings. MCASD curator Robin Clark notes that these works "reward close looking" as MacConnel "uses pattern subversively to embed contradictory imagery," citing Nutritious (1981) as an example where falling bombs co-mingle with tourist attractions. Humor, irony, critiques of capitalism and word play permeate these works. In the 2000s, MacConnel returned to his roots playing with sensuous color and abstraction reflected in his Woman with Mirror series inspired by Picasso. MacConnel explains, "with one reading it's simply an abstract form, but with the title it just flips it--even as a momentary glimpse in your mind of something else."

A surprising twist planned for MCASD's retrospective is an installation of beach trash collected by the artist over the past forty years slated for the museum's Krichman Family Gallery, overlooking the Pacific Ocean. While seemingly out of context, the piece demonstrates MacConnel's perpetual interest in marginal imagery and low-brow culture, and his playfully subversive sense of humor.