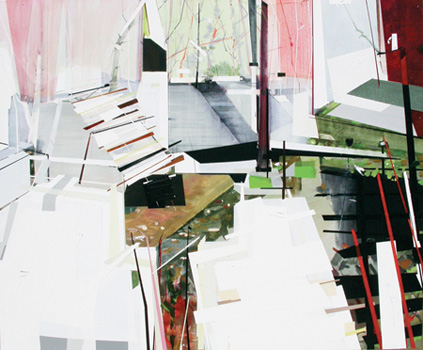 Landscape painting often evokes quietness, stillness; bringing solitary contemplation onto a distant horizon. In the hands of Dimitri Kozyrev the scene breaks up and is shattered like glass, as we are rushed through a terrain familiar, if not desired--the collision of what we hope we know and what we may fear. Over the last decade Kozyrev has surveyed what he refers to as "the collapse of the synthetic and the organic," through a dizzying array of tactics that enjoin scenery from the natural and imaginative worlds into fractured tableaux of seeming chaos but eerie, if tremulous, balance.

Born in Leningrad in 1967 during the Soviet period, Kozyrev left what is now St. Petersburg, Russia in 1991; he currently lives in Tucson, Arizona where he teaches art at the University of Arizona. Though he was raised mere blocks away from the famed Hermitage Museum, he did not pursue formal art studies until his arrival in America, obtaining his MFA from the University of California, Santa Barbara before moving to Los Angeles, where he began his first explorations of landscape. His early work in LA was clearly influenced by color field painting, but these are not the quiet scenes drafted by a plain air painter standing in repose. Incorporating glimpses of fields and far-off buildings as seen at 70 mph--"what hits the eye while not really paying attention"--his first series are hybrids combining multiple one-point perspective scenes, usually two, sometimes three, based on photos snapped from a rushing highway car. To heighten the schism effect, Kozyrev paints the skies in soft oils, describing the land below in graphically rendered acrylics. Mixing views of California countryside with scenes taken from Pennsylvania, he creates a composite landscape that is as affected in appearance as it is true to the jumble of memories of a long, half-seen cross-country road trip.

As peripatetic as his subject, Kozyrev is not content to dwell long in one series, and has completed five collections in ten years. In the Lost Edge paintings and more recent works, the gaze often takes flight to aerial views; tapestries of fields break into geometric plates, and the tension between a graphically rendered picture plane and naturalist portrayal increases. Sometimes the horizon is catapulted both above and below the center, or the foreground completely overwhelms the sky, erupting into shards that evoke explosions, or the over-pixilated detritus on a dying computer screen. The references to speed, and allusions to machine-like destruction bring to mind the early modernist schools of Constructivism and Suprematism. These are not casual references, but the intent of the painter, who has assembled all his series as an allegory of both art and political history. Kozyrev maintains, "just as the concept of the military avant-garde has been 'lost,' because of changes in methods of warfare, the avant-garde in the contemporary art world, has also lost its edge."

As a response to this "lost edge," he has introduced memories of war in the form of "ghost soldiers" whose shapes, vaguely limned within an apocalypse of shredding geometries or seen below strangely cheerful trees, have been taken from old photographs of a forgotten event, the Winter War between Finland and the Soviet Union in 1939 that presaged the general conflict of the Second World War. Unseen faces are alluded to by helmet shapes or warm organic masses. Of these soldiers Kozyrev says: "What I am doing with these people--I'm not trying to reclaim them, I'm not strong enough for that." But as they are seen unknowingly by the viewer, within the swarms of black squares that recall Malevich, another memory is paid tribute.

"Dimitri Kozyrev: Lost Landscapes," a survey of the last ten years of landscape paintings, will be on view at David Richard Contemporary in Santa Fe, NM. From November 15 -- December 11, 2010. www.davidrichardcontemporary.com