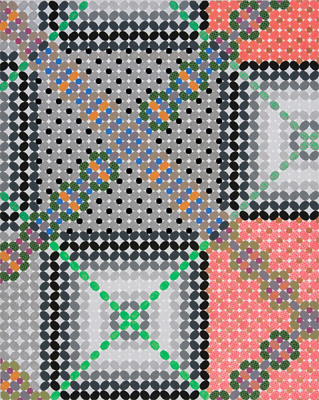 Psychedelic, hypnotic, dizzying, hallucinogenic. Standing in the midst of Geoffrey Todd Smith's recent show at Luis De Jesus Los Angeles gallery, it is easy to understand the consistency of drug-affiliated adjectives leveled at his work. Unorthodox color combinations of colored circles and ellipses--solids, stripes, and squiggles--are assembled into patterns of pulsating squares and rectangles intersected by strident diagonal lines. The contrasting shapes vibrate with energy, making it difficult to maintain focus on any individual element. The forms seem to do anything but conform to the constraints of the grid Smith has imposed on them, instead creating an optical superhighway that appears to move off the panel and stretch out to some unknown destination.

The 35-year old artist, who has been given such daunting labels as "One of Chicago's Most Collectible Artists," currently teaches painting and drawing at the Northern Illinois University where he earned his MFA after doing his undergraduate studies at the Art Institute of Chicago. The tension created in this body of work reflects the overall balance of opposites that runs throughout Smith's practice. The playful titles belie their abstract formality. He works with materials as orthodox as oil paint blended with those as urbane as gel pens. Smith's influences are equally disparate, ranging from art history to Milton Bradley board games.

Speaking with Smith amid the frenzy of color and activity of his work, it is at first surprising to hear him cite Mondrian as an influence. On second look, despite their overt differences and Smith's dastardly diagonals, there is a correlation, a sense of searching out the possibilities that exist within a given set of controls. "I was never a fan of the grid," says Smith, whose earlier work was almost defined by a chaos theory/horror vacui approach, "but eventually, I thought this would be more challenging to make the work different, and to see how far I could take it." While artists as varied as Vasarely, Noland, and Rex Ray come to mind, there is a measured response to questions about his artistic influences. "I try not to dwell on it; it's too easy to get wrapped up in art history or design history. I am, of course, very aware of it," Smith adds. "I take it as one of many things... and I try not to pin it down."

Popular culture is of equal concern to Smith; this is a world where Atari 1600 has equal influence as Op Art, if not more. "In the old computer games, the graphics were so simplistic, a shape had to stand in for an idea--they didn't have realistic images like the games today," Smith explains. "It influenced me in that I had to use my imagination about what the shapes could be." More than a visual reinterpretation, Smith aims to recreate the physical anxiety produced playing games like Perfection and Tetris through the "physicality of the work," and the tension of color, form and texture. But it isn't all video games and gadgets; Smith is equally at home referencing the influences of Afghans, quilts and sticker collections. The textile patterns created by the free-hand patchwork interrupted by stitches, relate to the complex design of electronic circuit boards. "relate to both," Smith says, "I felt there was connection between this domestic creation and they looked similar to what was then cutting-edge technology."

Watching the snowfall during the beginning of what would rank among the top five blizzards in Chicago's history, Smith speaks of his process of exploring the parameters of his next series of paintings. "I have six drawings that I am doing at the same time," he begins. "I'm looking out the window and it's snowing, and I notice I'm making some that look cold, so then I make some that work in the opposite direction... I zig and then I zag."