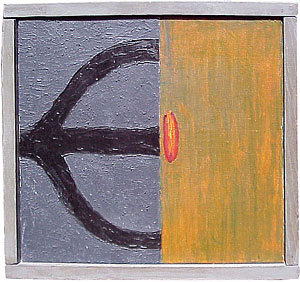 Forrest Bess (1911 – 1977) lived south of Houston on a sliver of scruffy land where he eked out a living by fishing and trawling for shrimp. While he was destitute, the art he produced is rich. In fact, it’s been called “Texas’s best.” Bess’s work ranges from representational woodcuts to murky images that insinuate primitive and deeply charged ideograms.

One example is “Tree of Life.” It’s crudely rendered and obviously dredged from the deepest twilight of the artist’s psyche. In fact when it’s turned clockwise, he dubbed it “Sign of the Hermaphrodite.” Bess explained: “I close my eyes and paint what I see on the insides of my eyelids.” While his art is crudely rendered, it’s made its way into prestigious museum and international collections; the French adore him but Texans have never given him his fair due. His fascination with hermaphroditism ended with a form of hideous self-mutilation. He was eventually committed to a mental institution, leaving us to wonder if his behavior was mere pathology or, in light of the art we see here, an obscure gift of a brilliant mind adept at traversing boundaries and inhibitions. I ardently lobby for the latter. This show groups Bess with aesthetically sympathetic artists Andrew Masullo, Chuck Webster and Chris Martin. While they all embody a vector into internal landscapes, Bess manifests the most richly evocative plunge among them.