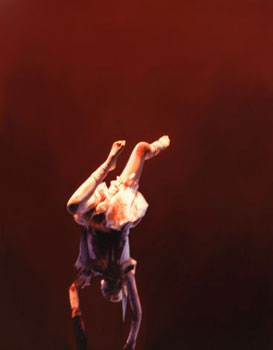 The “tragic and timeless” ancient theme of man’s fate that Mark Rothko and other postwar artists aspired to address in the then vital new idiom of abstraction finds new expression in Gottfried Helnwein’s nine mixed-media paintings. Inspired by Hanoch Levin’s opera, “The Child Dreams,” a mythic treatment of persecution, exile, and transcendence for which the artist designed costumes and sets, they are powerfully theatrical as well as exquisitely painted: one thinks of other tragic dramatists — Caravaggio, Bernini and even Bacon. Levin died in 1999, well before the 2010 Tel Aviv premiere of the opera, so its melancholy themes of justice and mercy attained only after death have a real-life poignancy, as well as literary and musical merits (to which I cannot attest, not having seen the drama).

Helnwein’s related paintings, however, somber depictions in cream, black and deep crimson of falling young girls in white dresses, their limbs gracefully splayed against shadowy backgrounds, are stunning and provocative. Most of the paintings depict single figures, slowly falling, upside down. The large “Murmur of the Innocents,” the title an allusion to the Biblical massacre of the innocents, contains several dozen figures, suggesting an eternal drift downward irrespective of contemporary Herods. These may be contemporary versions of religious paintings, Baroque martyrdoms stripped of dogma. They ask us only to remember and to reflect. Robert Flynn Johnson wrote, about a Helnwein museum show that he curated: “Many people feel that museums should be a refuge in which to experience quiet beauty divorced from the coarseness of the world. ... It is not only the right but the responsibility of the museum to present art that deals with important and sometimes controversial topics in our society."