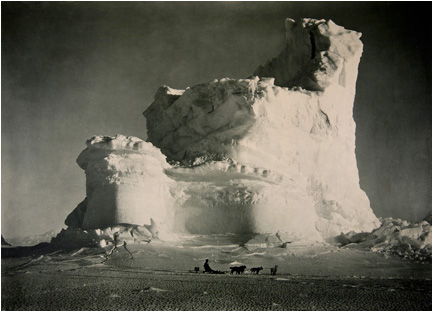 Inside the image of the hut of Robert Falcon Scott, a remnant from his doomed expedition to the South Pole just over 100 years ago, one sees the carcass of a penguin. The frigid temperatures have preserved the specimen and, judging from Joan Myers photograph "Inside Scott’s Hut (Penguin)," it looks like it could have wandered in to die there only yesterday. Myers, following in the footsteps of Herbert Ponting, who documented the original expedition as one of Scott’s party, captures the bitter desolation of the site, as well as the beauty of the frozen landscape.

Ponting’s original photos, augmented by the addition of images shot by Frank Hurley from a later ill-fated expedition, betray little of the horrors that awaited the men who died in the cold. Myer’s photographs, however, particularly those shot inside the huts, are poignant reminders of the unrelenting cold’s brutal presence. Scott’s "Hut Chemistry Bench" depicts a remarkably intact set of test tubes, vials, and bowls, as though awaiting use by some ghostly explorer. Other images by Myers look more antiquated than Ponting’s own century old carbon prints, serving to lock the two photographers in a dialogue spanning generations.