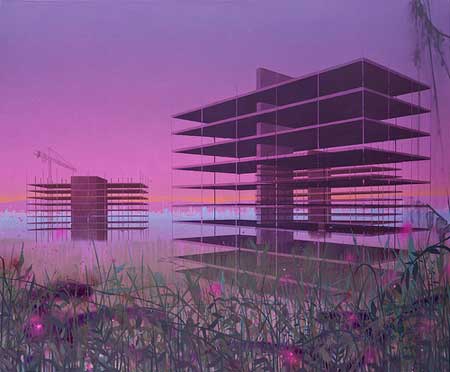 Imagined, futuristic landscapes are the common theme that runs through the work of artists Tadashi Moriyama and Robert Miniervini. But that is where the commonalities end, providing an opportunity to delight in very different, but equally engaging views of the world we’re headed toward. (It’s a theme that’s been featured prominently in other recent shows in the Bay Area, specifically those of Amy Casey and also of Alex Lukas.)

Minervini’s world is post-apocalyptic: shells of finely rendered, multi-story buildings hold court over an otherwise structure-less landscape that is filled only with shrubs, grasses and marshland. Trees are noticeably and suspiciously absent. Luminous multihued skies — oranges and pinks, blues and yellows — place the scenes at the beginning or end of the day, a visual metaphor for the larger “end of days” message. But these works are more hopeful than full of doom; they are very sparsely populated with humanity, small flowers are in bloom. The tone is of rebuilding and regeneration. These structures are new, as indicated by the presence of a crane in one work, placed far in the distance, and the fact that they are whole and show no signs of wear.

Moriyama’s world, comparatively cartoon-like, primary-color bright, and fantastical, features intricately networked communities or cities that appear to be controlled by a single or just a few, central figure-head(s). The big brother/government-oversight message is clear. Nature and technology appear as if enmeshed, equally holding things together and pulling them apart.

If Minervini is reflecting on what a recovering world will look like after a catastrophe and Moriyama is providing us a view of a future without one, neither world is exactly a view of paradise. The elements and themes here actually don’t veer far from today's world: the future may be closer than we think.