From Moscow with Love
at Photographs Do Not Bend (PDNB) Gallery, Dallas, Texas
Recommendation by Patricia Mora 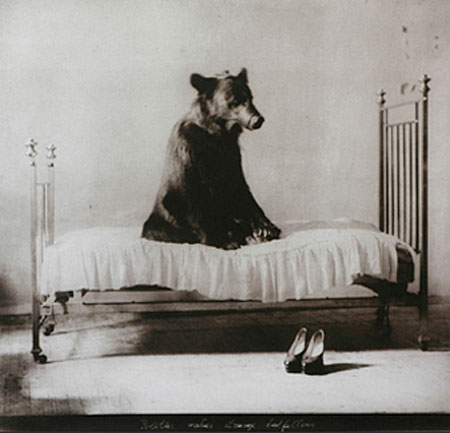 Forty representatives of the art world were invited to Russia’s first International Photography Review. Burt Finger of PDNB was among them and he returned from Moscow with a remarkable cache of work that runs the gamut from the political to the purely graphic to the ponderous. The latter is an especially apt appellation for Gregori Malofis ‘s "Photorealizm."

We’re summoned into the artist’s studio and unwittingly become privy to the artistic process. Malofis sits in the foreground, palette in hand. He seems to be contemplating a ballerina (captured mid-air) on his canvas. However, we also see an identical dancer levitating in the background. We’re left to assume that her impossibly extravagant pose inspires her twin image in the art piece. The implication is that the artist stalls things at their most extreme moment of beauty. The subtlety of being engulfed by Malofis’s studio gives the work a huge seismic jolt.

Another artist featured in the show, Dmitry Beliakov, chronicled the Second Chechen War, widely known for the unspeakable atrocities that were committed. "February 4, 2000, Grozny Chechnya" depicts a city reduced to rubble yet punctuated by the odd civility of a table setting. In the foreground, is a ripped green armchair that’s thoroughly gutted and exudes an eerie vacancy. Two figures seem to be mere afterthoughts – which is appropriate, given the hideous toll of rape and genocide that characterized the war Beliakov documents.

“From Moscow with Love” isn’t an easy show. It’s better than that. It’s a powerful, smart and well-curated gem.