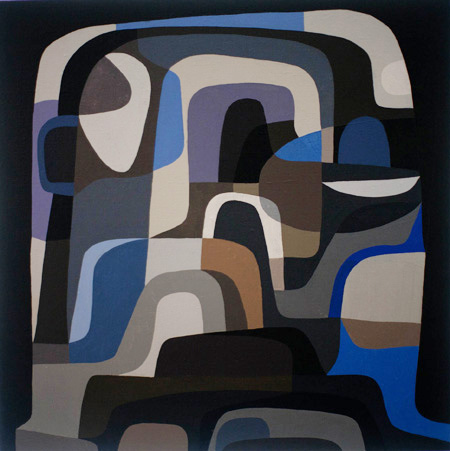 John-Paul Philippe was born in Oklahoma, moved to Dallas where he worked as a designer for Neiman Marcus, then subsequently moved on to London and now resides in New York’s Soho district. He’s made abstract art in all these locations and created sculpture for both public (commercial) and private venues. Not only has he designed chapels and galleries, he also does remarkable work for Barney’s New York.

In other words, he crosses boundaries between “fine art” and commercial venues. This exhibition presents an honest pairing of Philipppe's tabletop sculpture as well as paintings featuring looping shapes and subtle colors, and collages. “Welsh Lake 2” and “Butte” are fine examples of his work; they’re made of emulsified gouache on linen and mounted on thick panels. Philippe’s fondness for cities as well as his much loved rural cabin in Connecticut are in evidence. Diverse things come together under the aegis of his fluid sensibility and what issues from it is decidedly impressive art.  “Hill Work” reflects a diverse and impressive talent. If you fail to take note because he leans into the commercial world, your aesthetic prejudices may be showing.