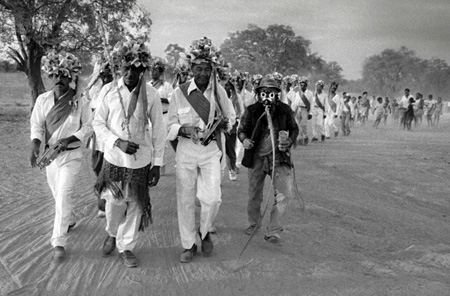 It is challenging to imagine compositions more compellingly envisioned than those in Ricardo Teles’ sumptuous exhibition, "Terras de Preto." This photographic essay presents vignettes of the Afro-Brazilian community in six Brazilian states. To suggest that the works are both formally and thematically immaculate is to enter the realm of understatement. Images of urban, village, and rural life capture these diverse peoples, and if the photos could be faulted for overlong titles, they cannot be impugned for any other criteria. Their shadowplay, dramatic angles, and startling subject matter provide feasts for the eyes and imagination.

The ruins of the colonial sugar mill at the "Frechal Community, Maranhão state" shows a boy climbing a piece of rusted metal machinery and another boy holding onto the device, gazing purposefully at an out-of-frame vista stage right. It is an intimate masterpiece, a duet between what we see and what is implied, virtuosically graded in grayscale, perfectly printed. In "Ingrapés dos Pretos Community, Para state," two boys, a woman, and a parrot stare down the camera with equal intensity from different depths-of-field, offering a confrontational tableau that tests the viewer’s capacity for symbolism in interpretation. Other pieces include a panoply of action shots, still lifes, and disturbing images such as a hacked-up anaconda lying dead on a river dock.  The show speaks of a time and place replete with human interest and cultural intrigue.