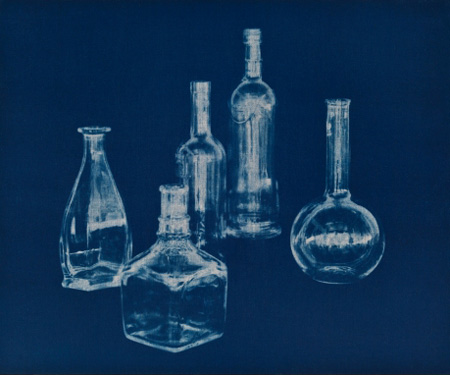 Chicago-based photographer John Opera has long incorporated the history of photographic image-making into his practice, and “People, Place, and Things” is no exception. Focused around cyanotype, an outmoded chemical method that results in the blue palette we now associate with blueprints, More important, the works in this show quietly challenge traditional ideas of representational media.

Whereas photography can often be charged with documenting the observed world, Opera’s cyanotypes possess the otherworldliness of this near alchemical process. With glass bottles, ropes, chains, fossils and hands depicted in simple figure-ground compositions, the works flirt with painting as the objects are detached from their contexts and enacted upon the warm surface of stretched linen. The subjects of Opera’s cyanotypes are non-narrative, like obscure catalogs, with the exception of a single portrait, "Woman in the Window" – an instance that reminds us of photography’s unique facility in capturing the fleeting moment.