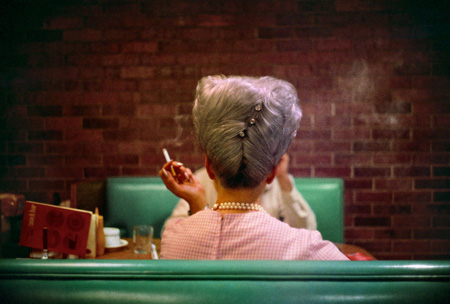 Photographed between 1966 and 1974 in cities such as New Orleans, Las Vegas, Los Angeles, Los Alamos and the Mississippi Delta, William Eggleston’s series “Los Alamos” celebrates the nuances of small town America and exposes the idiosyncrasies of modernity.  The large-scale color photographs here frame otherwise banal subjects - 24-hour cafes, drive-throughs, mom and pop shops that specialize in apparel for “Texas Tall Girls” - and expose a severe attention to detail achieved through depth of field and vantage point.

Eggleston’s photographs resist attachment to a definitive time or location, rather directing us toward memories stored in a collective subconscious. Each photograph praises a relic of America that might otherwise be overlooked, forgotten, or undocumented. “Los Alamos” demonstrates a discerning and patient eye that adds up to a picture of the world resulting from a chance meeting between the subject and the lens. A woman seated at an aqua diner booth is photographed from behind, revealing salt and pepper hair that has been spun into a perfect updo with every strand in place. Sequin pins stitching her coif in place mimic the lines of her spine. The man seated across from her is obstructed completely from the lens, but the woman’s attention to detail in styling her hair alludes to the artist’s consistently controlled gaze.