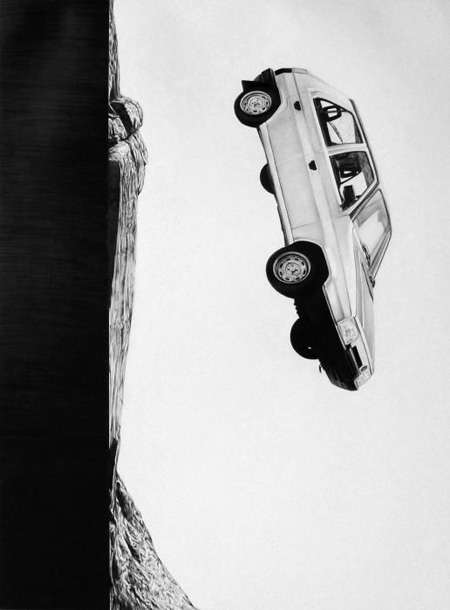 Debra Barrera presents work in a variety of media — drawings, prints, sculpture, video — united by an interest in car culture and the freedom and heroics it once symbolized. Dovetailing with this conceit, Barrera also mines the promise of space exploration. While sculptural assemblages anchor the gallery, the quiet graphite drawings are the real showstoppers. With exquisite draftsmanship Barrera shows a keen eye for detail. "El Camino on the Moon (Apollo 19)" features the muscle car and the lunar module, both 1972 models, on the moon’s surface. The terrain scored with tire tracks recalls a parallel conquest of new aesthetic frontiers: Land Art and Michael Heizer’s motorcycle drawings in the Nevada desert.

In contrast to these moments of American machismo, Barrera has installed what appears to be an elegantly modest monochrome wall relief. "For Dorothy Levitt" reveals itself to be a rear-view mirror from a 1986 Pontiac Firebird, paying homage to the early twentieth-century and rare female racecar driver and “motorina.” Levitt advocated the use of pocket mirrors before manufacturers made rear-view mirrors standard equipment.

Together, these themes coalesce as a (mainly post-war) moment of optimism the artist never experienced. Born in 1984, and earning her MFA in 2010, she came of age professionally after the economic meltdown. In her drawings, this dystopic reality couples with today’s expanded awareness of the environmental realities of exploration and conquest; as such the former symbols of freedom and mobility take on an air of danger.