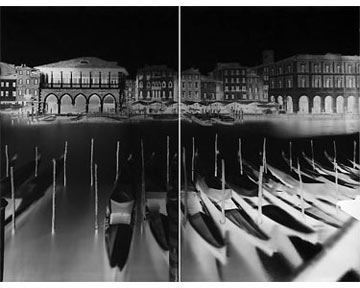 Vera Lutter makes large scale multi-framed black and white images that are presented in negative. They are made by placing photographic paper inside a large-scale homemade camera and capturing the images that appear through the hole (or lens) of the camera obscura. Lutter has previously made images of industrial as well as urban spaces. This latest suite of photographs focuses on Venice, Italy. With odd points of view and long exposures, the canals appear as a blur against the static buildings. Because the images are negatives, the sky is black, as is the water, distorting the stereotypical image of Venice as romantic place full of tourists. This Venice has a haunting and alienating aura. Places like San Marco, Campo Santa Sofia and San Giorgio are still majestic but no longer so familiar. It’s the schism between the known and the unknown, the expected and the new that gives Lutter's images of Venice their edge.