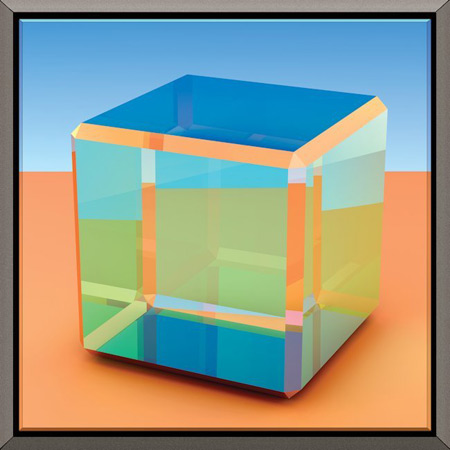 Day-Glo colors captured in sculptural, geometric arrangements populate Ronald Davis’s latest body of digital work. In the 1960s Davis was a central figure in the wonderfully named Finish Fetish artist group in Los Angeles, whose members regarded a work’s surface precision as crucially important. Later, in the 1980s, Davis made art that explored the inherent immateriality of computerized imagery against the material plasticity of the modern era. So how does his pixelated praxis hold up today, in our IT-inundated age?

In works that look like photographs of three dimensional objects, Davis mimics the diamond sheen of man-made objects in righteous, riotous arrangements of geometric color. They are pristine. glossy and multi-dimensional, possessed of a depth that is perplexingly illusory. The bubble-gum pink "Holed Cube," with its hard candy shininess, seems independent and a little aloof — and the fact that it was made with software and not from plastic molds imbues its perceived dimensionality with a far-out, marvelous transience. A forefather of contemporary digital art, Ronald Davis continues to break new ground with works that are triumphantly hip and thrillingly visceral.