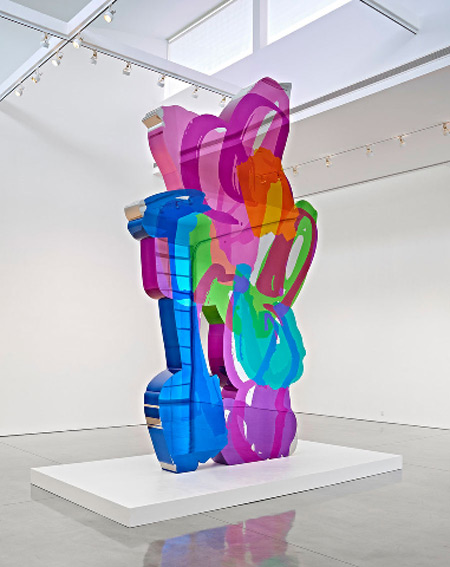 With only two objects on display, we have come to expect more flash from an artist that Jerry Saltz calls the "… emblematic artist of the decade." The glitz, sex, and showmanship of Jeff Koons are unmistakable and even admirable at times. It’s a level of art stardom that few will ever reach and subsequently raises a host of issues that often outshine the artist's work. Yet two works did afford more time for contemplation and reflection. The largest piece is entitled "Coloring Book" (1997-2005). It’s a twenty-foot tall stainless steel sculpture that resembles a large metallic mirror. It changes colors with large sweeping curves that resemble swift and bold gestures made by a crayon without the outlines of the original subject. It’s actually quite expressive for this artist when compared to his previous stainless steel creations.

The new work entitled "Gorilla" (2009-2012) is exactly what the title describes. The black granite figure holds its hands to its chest and stands on a base made of the same material. It's an item typically made of plastic and created through injection molds commonly purchased from the gift shops at zoos and theme parks. The sculpture is even given the same rough, store kitsch finish with bits of extra material left around the edges. The replica of a children’s toy has little expression or movement compared to the free flowing lines in "Coloring Book." The level of professionalism nuanced through material and scale is impressive in both pieces, but they feel like contrasting ideals of childhood masked behind the now familiar Koons’ aesthetic.