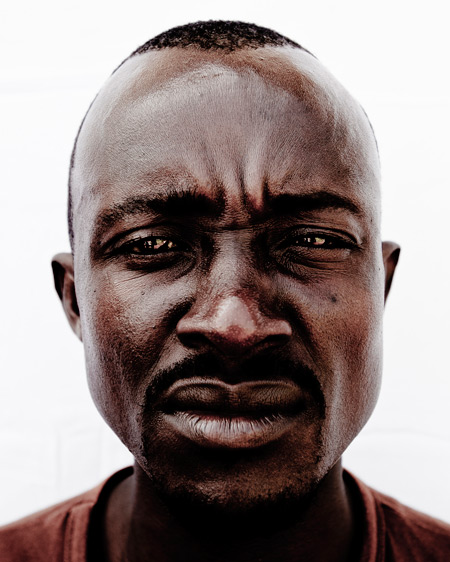 Thematically confrontational, technically immaculate, Pedro Farias-Nardi’s portrait series, "El Otro," takes a line from the Richard Avedon playbook and runs with it. The subjects of these portraits - Haitian migrant workers living in the Dominican Republic - regard the camera implacably, standing before a white background.  Although that background is searingly bright (Farias-Nardi took the photos outside in full midday sun), the workers’ faces resplendent in sumptuous color and shallow focus.  Every pore, wrinkle, scar, bloodshot eye, and freckle pops with heightened presence. These are careworn, troubled faces that telegraph narratives the viewer can only guess at.

Another body of work, "Cold Trade," shot in black-and-white, has a more photojournalistic focus, showing workers in the Dominican ice trade in the act of transporting large blocks of ice. These works are well-composed and gorgeously printed but lack the intense empathy of the "El Otro" portraits.