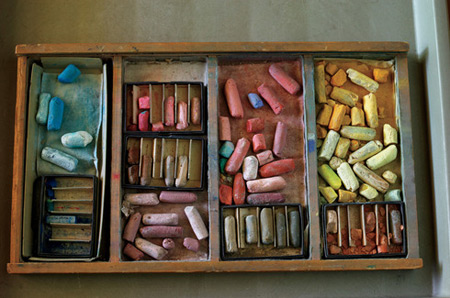 "Pilgrimage," Annie Leibovitz’s latest book, was inspired in part by her recent financial folly. Several Februaries ago, the renowned photographer borrowed $24 million and used the copyrights and negatives to all of her photographs as collateral. Absent of any human pilgrims, "Pilgrimage" instead consists of objects and places that achieve a raw, often brittle humanity, suggestive of insights perhaps drawn from her recent bumpy journey. The show recently opened at the Smithsonian and has toured the country, much like the photographer herself did in order to capture these images.

Gone are her signature celebrity subjects, and in place of manicured starlets and studs are things. Leibovitz’s enthusiasm about this departure is palpable. One photo is a close-up of a snow-white cotton collar; it’s a detail of a dress of Emily Dickinson’s that Leibovitz encountered on a trip to the poet’s home. The preponderance of turquoises and dusky roses in a tray of chalk pastels makes sense considering they belonged to Georgia O’Keeffe. Similarly redolent is a pair of stiff, well-worn leather gloves that were found in Abraham Lincoln’s pocket on the night he was assassinated. These relics indeed provoke curiosity, but not in a macabre sense — they’re objects of immediate and intimate historical importance — and they make "Pilgrimage" worth the visit.