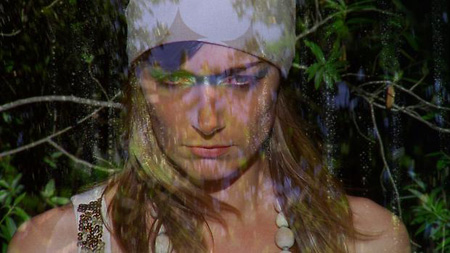 In his practice, New York artist Michael Robinson consistently straddles genres, and this exhibition follows suit with works that fluctuate amongst the categories of film, video art and two-dimensional picture making. Robinson’s presentation of photographs and collages in “Circle Spectre Paper Flame” is anchored by "Circle in the Sand," a 45-minute long film in which a small cast of characters comprises a post-hi-tech-consumer culture living in nature.

The artist’s trademark pop references are apparent here in little morsels: outmoded media, acrylic fingernails, snippets of music, and flickering neon colors. The female actors are clad in the shreds of cheap, glittery nightclub attire, the men in shabby military garb. None of them converse, save through the reading aloud of kitschy paperbacks and People magazines. Aside from this visually engrossing narrative, the photos read like film stills and the well-crafted collages like formal supplements to "Circle in the Sand’s" depiction of an imagined, but somewhat plausible future.