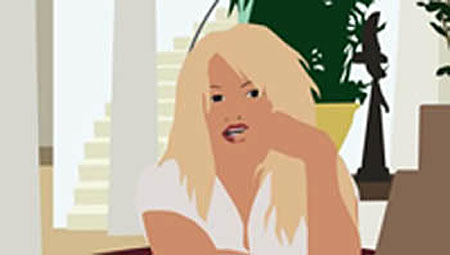 The title for “The New Normal” comes from Dick Cheney’s description of the heightened surveillance he told us we must live in given a post-9/11 world. Using the Internet for their source material, Guthrie Lonergan’s MySpace videos, and Miranda July and Harrell Fletcher’s assignment from “Learning to Love You More” both depict ways individuals willingly offer up bits of the personal for public consumption. In “Vice Presidential Downtime Requirements,” Jennifer and Kevin McCoy recreate the hotel room particulars (like having the TV set pre-tuned to Fox News) for Dick Cheney. Compared to the brouhaha over the leaked memo, the installation is surprisingly banal. More powerful is the work where the artists stepped away from the computer. Trevor Paglen’s chilling presentation is the copied fake passports made by a Milan hotel as six CIA agents prepared to grab Abu Omar. Sharif Waked’s video of runway models with incongruously bare midriffs is explained by his video’s closing sequence of Palestinians photographed at Israeli checkpoints, similarly exposing themselves to prove that their middle sections are not taped with explosives.