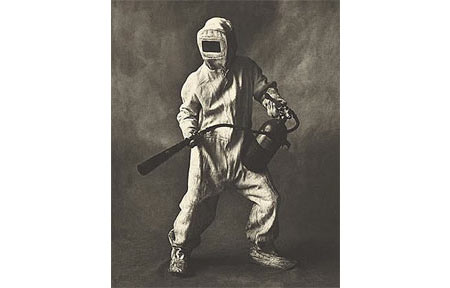 [Penn passed away this Wednesday, October 7, at age 92--Ed] On assignment in post-war Paris for a hectic ten day Vogue fashion shoot, Irving Penn managed to photograph scores of petis métiers, scouted out for him by Parisian street photographers such as Robert Doisneau. Instructed to arrive dressed in their work clothes, the small tradesmen were ushered into Penn’s rented studio and posed, isolated in front of a non-descript canvas drop, sandwiched between appointments with celebrities like Alberto Giacometti and the hordes of haughty models flaunting France’s fall fashions. All trudged up seven flights of stairs, the workers encumbered by the weight of the tools of their trade. Samples of the subsequent publication of Penn’s seminal working class photographs in Vogue magazine accompany this exhibition of his entire collection of over 250 works. From Paris Penn continued to photograph small tradesmen in London and New York in the 1950’s. The pictures convey the workers' pride as well as the photographer’s inventiveness and genius for staging. But today’s dismal economy pushes Penn’s stunning studies of rag pickers, coal men, newspaper sellers, etc., towards a kind of memento mori to jobs lost and workers displaced by technology and corporate globalization.