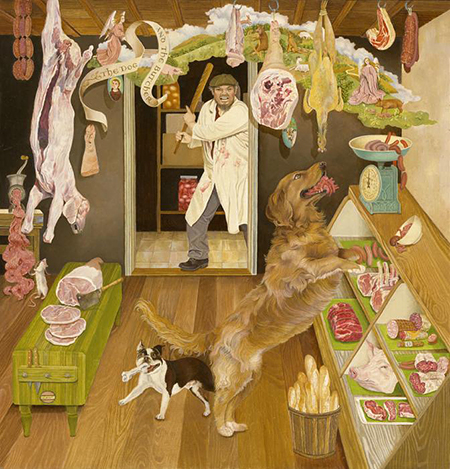 In one of Aesop’s Fables, “The Fox and the Crow,” the crow has a piece of cheese that the fox wants. The cunning fox flatters the crow, calling it beautiful and then wondering if its voice is as lovely. When the crow caws, the cheese falls and is devoured by the fox. Like all of Aesop’s fables, this is a cautionary tale; in this case it warns against listening to flatterers. When Ellen Tanner found an illustrated copy of Aesop’s Fables, she was inspired to bring them to life. In small, finely detailed oils using thin glazes of color on a reddish-gray grisaille ground reminiscent of the Flemish masters that she admires, Tanner recreated 11 of the fables for this show.

In her painting of “The Fox and the Crow,” Tanner takes an unusual approach, placing a young girl who looks a bit like Alice in Wonderland in the foreground. The girl stands behind a bank of ferns and watches the fox. To her left are what appear to be magic mushrooms and a tree trunk so animated that it has a life of its own. One is reminded of Brueghel’s “Landscape with the Fall of Icarus,” in which the focus is a farmer plowing in the foreground, while Icarus falls into the ocean quite unnoticed. In Tanner’s painting, the crow and the cheese may take a moment to locate, but there are many other beautifully executed elements to entice and entertain the viewer.

One of the more striking paintings in the show is “The Raven and the Snake,” in which a raven tries to make a meal of a snake it found sleeping in the sun. The bright green snake, however, is about to bite the raven, who, according to the fable, will die regretting his choice. Tanner’s detail is riveting, even including small medallions depicting other subjects, including St. George slaying the Dragon and baby Hercules killing the snake that Hera put in his crib.