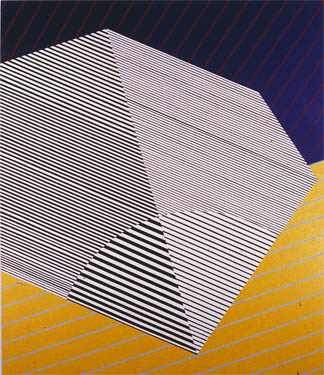 Though longtime New Mexico resident and optical abstractionist Oli Sihvonen (1921-1991) was one of the original Taos Modernists, his high voltage, brilliantly hued work places him in a category all his own. This show’s eleven large-scale paintings, executed from 1988 to the year of his death, constitute an impressive group. From a pictorial standpoint if not a theoretical one, the artist reacted against the unrestrained and frequently angst-ridden painterly excess of the Abstract Expressionists. Whatever his incentive, Sihvonen, the New York-born son of Finnish immigrants, reveled in tautly organized layouts of color and form, employing repeated patterns and strong, sometimes garish arrangements of color. At Black Mountain College, Sihvonen was a student of Josef Albers, whose influence radiates across geometric-heavy works like "Untitled (019)." Its color-ringed central square supplants a circular portal with a hard-edged one.

Black-and-white-patterned chevrons are stacked haphazardly in "Untitled (016)," a disorienting work whose elements seem to vibrate off the canvas. Closely layered, thin strips of black and white form an ersatz pyramid in "Untitled (074)" — a pattern repeated in navy and red in the composition’s background,  with yellow and turquoise in the work’s foreground. At 8 feet tall, "Mobius Mode" is especially commanding. Hypnotizing stripes of white and pale pink are interrupted by a twisting strand of narrow black-and-white lines. These dazzling, sometimes dizzying paintings buzz with energy and possibility, making them feel triumphantly contemporary.