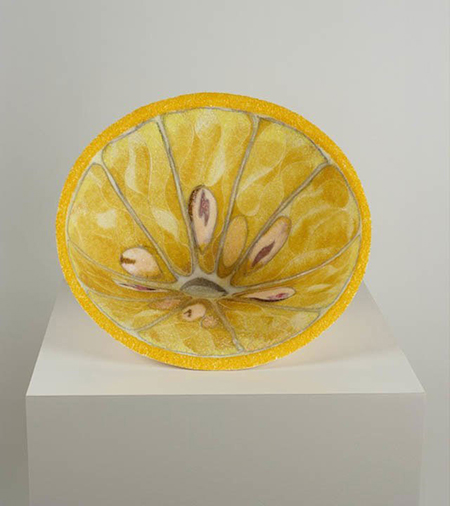 Two artists who work in varied styles and materials but whose multifarious work always bears the strong stamp of personality are nicely paired in parallel solo shows. Gay Outlaw’s witty and even humorous conceptual sculptures fill the main gallery, while inkblot drawings by the late Bruce Conner, one of the original Beat artists, occupy the side gallery. If conceptualist or nontraditional art sometimes seems overly obscure, the beautifully crafted works shown here are approachable objects that also happen to point beyond the visible, or, to use the Duchamp’s more enigmatic term, the retinal.

Conner, of course is known for his experimental films, creepy Gothic assemblages that savage the consumer culture of the 1950s and 60s, human-body “Angel” photograms, obsessively detailed abstract ink drawings, and his engraving collages á là Max Ernst (who inspired the fellow counterculturalists Lawrence Jordan, Jess and Wilfried Satty as well). Shown here are seventeen of the inkblot drawings dating from 1992 to 2003. These untitled works (sometimes listing the dates of their creation) have never before been exhibited, and are must-sees for Conner-philes, at least until the next retrospective. Small vertical folds in the paper sheets reveal the artist’s working method of placing droplets of gray ink wash into rectangular spaces and folding the paper to create mirror reflections that suggest faces, heraldic shields and especially pictograms. (For the record, Conner loathed the word Rorschach.)

The modestly-sized drawings. measuring from approximately four by five inches to almost the dimensions of an A-size page, thus resemble manuscripts that we can never decipher, but with the pictograms tantalizingly suggestive of narratives. The art-historically-minded may recall that a number of budding American Abstract Expressionists explored this incented-alphabet territory during the 1940s, when Surrealist automatism, a spontaneous, improvisatory method of freeing the conscious mind, was metamorphosing into the AbEx gesture, to be read by the viewer not denotatively, but kinesthetically, as performance and especially as heroic individuality, writ large. Nothing could be further from AbEx Sturm und Drang than Conner’s columns of perfect, delicate, evocative characters, which have a definite Oriental vibe. Several of these drawings are square in format, with ranks and files of identical-sized pictograms; others feature variations in the character size, and array them within rectangular or other geometric formats, but always symmetrically. Reproduction cannot capture the effect of these small ‘manuscripts’ that oscillate between representation and signification, the perceptual and the conceptual; view them quickly, and you miss their compelling charm and power.

The ten sculptures by Outlaw continue her researches into materials and immateriality. A pair of works from 2010 and 2011 continue her playful deconstruction of minimalist form. “Untitled” (2010) is a bronze sculpture of what appears to be a section of heavy-gauge piping, laid on its side; look closer, however, and the piping is composed of hundreds of pastel-sized sticks aligned side to side, like the crystallized lava in basalt columns. “Untitled (Stuffed Cube)” (2011) is a wooden cube composed of hexagonal tubes joined side to side, with their cores hollow, suggesting pencil casings minus the graphite. Half the cube is composed of the tubes that have been capped with tromp l’oeil shaded-cube patterns that derive from ornamental design styles — parquet flooring comes to mind — so that Outlaw’s cube becomes an Escher-like paradox of sculptural form in combat with pictorial illusion.

The majority of the works employ pâte de verre, or glass paste, an ancient technique of kiln-firing varicolored glass powders in a mold. (Making candles from melted crayons would be somewhat analogous.) Outlaw’s “Home” theme is evidenced in her choice for transformation of homely domestic objects: a soccer ball that looks identical to a foam-rubber child’s toy; a blue latex glove, comically inflated into a balloon; a pyramid of seeming suede that could have fallen from Granny’s sofa and exudes a Duchampian “Coin de Chasteté” irony; and a bean-bag chair merged with a cosmic eyeball. Outlaw employs the glass paste as a kind of mosaic in a trio of sculptures in conical forms crimped at the narrow end, like coffee filters, within which she has created crystalline dioramas of a lemon wedge, vastly enlarged, a ribbed structure that suggested a baleen whale’s mouth, and an internet-derived fish-eye view of the artist’s home, seen from the street, replete with recycling bins and overhanging power lines. The conical form derives from a modernist chair the artist recalls from childhood. But the views contained within the forms connote the mysteries of memory, and the inverted perspectival cones the subjectivity of vision.