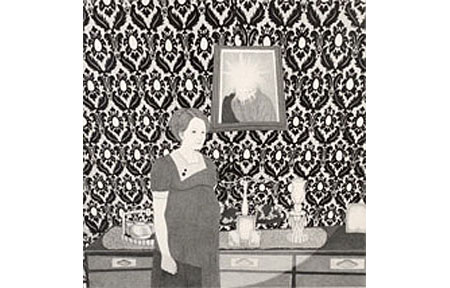 Michael Bise's eleven new graphite drawings represent most of two years' work, and it was worth it. Bise's signature, intensely worked surfaces are crazier than ever, and the square footage they cover is impressive. Then there's the Disney/God thing. Bise survived a childhood in a fanatically fundamentalist Christian family, and continues to mine the strong and contradictory images that shaped him. Some contrasts are almost too predictable: in one scene a nude boy-Bise humps his Mickey Mouse toy as his Bible-clutching mom peeks through a crack in his bedroom door. In another, she whips him with a belt in front of a banner for Disneyland, "The Happiest Place on Earth." But it's Bise's gift for caricature that boosts the best pieces in the show past heavy-handed irony. “Revival,” the largest and most elaborate, is a fascinating panorama of dozens of women frozen in ecstatic poses. At first it's a mountain of whipping hair, rumpled clothing and twisted faces, but a closer look resolves their communal ecstasy into acutely observed individual personalities, drawn with sympathy and wit by someone who's been there.