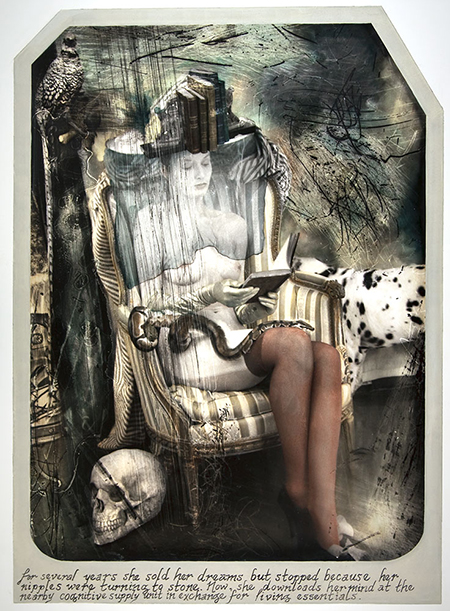 For septuagenarian photographer Joel-Peter Witkin, love — in all its complex manifestations — is more than an intimation or even an overt suggestion; it is, as he calls it, the “cornerstone” of his work. The Brooklyn-born Witkin has consistently delved deep into squeamishly intimate, yet irrefutably human attributes of neuroses, sexuality, and secrecy. His meticulously produced photographs are gothic vignettes, with themes plucked from Coney Island freak shows: think bestiality and cannibalism, enacted by limbless dwarves and bearded ladies. Witkin's most recent series, "Love and Other Reasons … to Love" is thematically gentler, though no less provocative.

"White on White" could be a nineteenth-century daguerreotype, with its splotchy finish and reclining nude model. Little vines mix with her curly dark hair and crisscross her pale body. Tucked beside her are two birds, their dark feathers and rounded forms contrasting beautifully with her white, fleshy beauty. Other photographs suggest allegorical or mythological associations, the origins and context of which are unclear. The surface of "Execution of an Extraterrestrial, Virginia, 1864" is gritty and distorted, as though fished from a trunk in a dusty attic. Its titular subject is suspended from a noose; a soldier on horseback in confederate uniform looks on. Witkin’s humor (if that’s what it is) is manifest in the inclusion of twin spaceships that hover just beyond the gallows. "Penis Shoe with Turnips," in which an elongated, phallic-shaped high heeled shoe is captured in profile, is both hilarious and erotic. Near the convergence of the spike heel and the delicate underside of the shoe is a dangling circle — ostensibly a testicle. The cartoonishly sexualized object is bizarrely accompanied by turnips, still rugged and dirty as though just plucked from the ground. For Witkin, love is a many-splendored and marvelously mysterious thing.