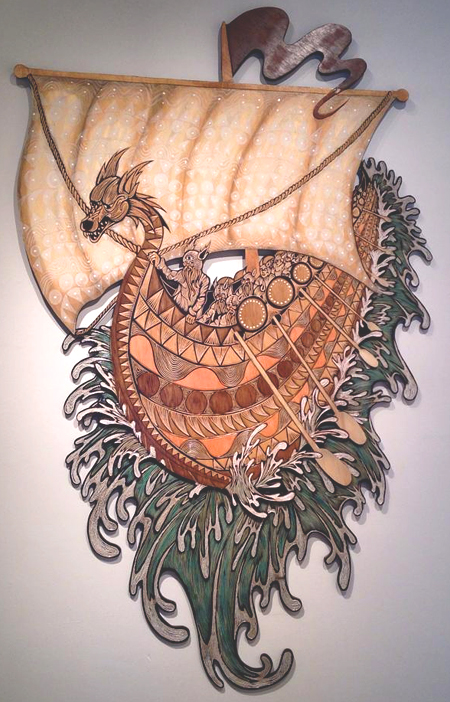 Dennis McNett, "Sailing the Sea of Sutr to the Wolfbat Sanctuary," painted woodcarving

Sailing to a mysterious place called the Wolfbat Sanctuary across an exotic body of water like the Sea of Sutr may sound like a thrilling expedition, but you won’t find either of these on any map. Both were envisioned by Brooklyn artist Dennis McNett, who uses his imagination to take the viewer on a vaguely Nordic journey complete with a Viking ship, animalistic masks, painted woodcarvings, and intricately detailed printmaking. His designs are as complicated as the iconography. The wolf bat is an animal spirit described as resembling a wolf but with webbed, bat-like wings. McNett’s wolfbat is extremely menacing due to its piercing eyes and long, pointed teeth. The artist uses the wolfbat to pay homage to Fenris, a character out of Viking lore who was freed from imprisonment and given a second chance, thanks to his sister.

The wolfbat is only one of many creatures in McNett’s oeuvre. A moth with outstretched, intricately patterned wings is named the “Black Witch Moth.” A ram with large curving horns and a snake growing out of its forehead is named “Old Winter Deity.” And a caterpillar-like creature with a single large eye on its forehead is “Yellow World Deity.” McNett carved and painted these pieces from wood, adding elaborate designs. Four tribal masks were created from etched leather and wood surfaces that had been shaped using epoxy. As a prolific printmaker, McNett often collages his prints onto various surfaces, including wood that has been shaped into the hull of a ship. He has created several of these Viking ships, using two of them in a non-permitted parade through the streets of lower Manhattan. All are included in this installation. McNett’s designs have been used to decorate everything from skateboards to snowboards to shoes. He was invited to design a Barney’s window display in 2010, and his work was included in a survey of graffiti, street, and urban art in 2009. The current exhibition is both contemporary and ancient, putting viewers in touch with their inner wolfbat.