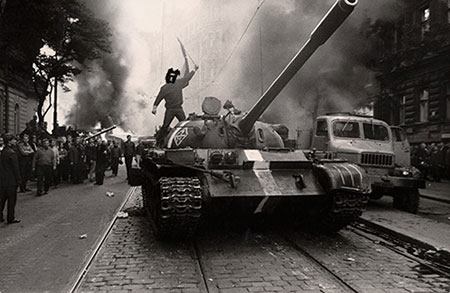 A famed exile from his home country for decades after his “Invasion” series, which documented the Czech people’s resistance to the 1968 Soviet invasion of Prague, Czech photographer Josef Koudelka has chronicled his extensive travels across the European continent and beyond. “Nationality Doubtful,” the artist’s first United States retrospective in over 25 years, is a testament to Koudelka’s career-long commitment to capturing the human experience, no matter the political and geographical borders in which they may be seen.

Here, exquisite examples from “Invasion” are accompanied by early theater-based photographs, work from his exile era in Western Europe and an installation of another well-known body of work by Koudelka, “Gypsies,” in which he photographed Roma groups throughout Slovakia, Romania, Hungary, France and Spain between the years of 1962-1971. For the first time in a Koudelka retrospective, the photographer’s books are given consideration alongside the wall-bound photographs. Of particular note are the prototypes for a book of panoramas, printed in miniature, affixed to the wall end-to-end so as to encircle the gallery space. Unlike Koudelka’s earlier series, these mockups and their full-scale counterparts are devoid of figures, though the man-made landscapes of Greek ruins, fenced off industrial buildings and recently felled forestland impart just as much human drama as Koudelka’s portraiture.