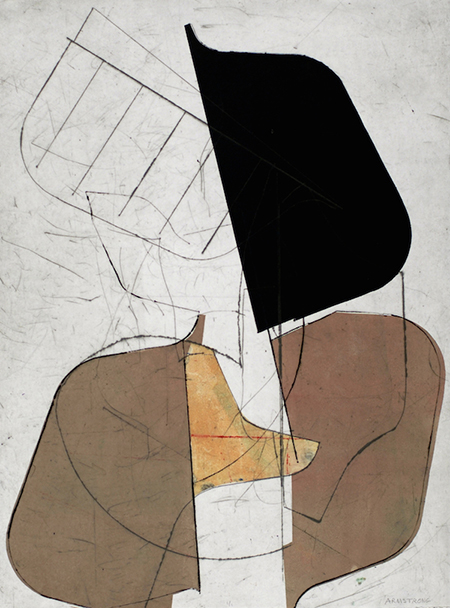 Master printmakers are the hallowed caretakers of artists’ work, giving it new life in limited-edition reproductions using various press techniques. Often going unrecognized, though, is the fact that many printmakers are themselves artists, pursuing their own muses. “Ink: Three Generations of Printmakers” sheds light on three Phoenix craftsmen who create extraordinary art in mixed media and photography, the most prominent among them being John Armstrong of Armstrong-Prior Inc., whose clients include Martin Mull, Patti Warashina and Don Reitz. Thus, “Ink” not only makes space for Armstrong’s glue stencil serigraphs of three Philip C. Curtis works — looking as brilliant as ever — and monoprints done for other artists, but also shows Armstrong’s own monoprints with collage. “Red” is particularly intriguing, with loose red forms challenging the viewer to decide whether they lie under or over the field of alternating black and white shapes. In “Untitled,” the viewer can see pencil marks from one area drifting ghostlike into an adjacent black shape.

Also represented in the show is Brent Bond of Santo Press, who has collaborated over the years with regional as well as A-list artists. Bond’s own work plays with appropriated images, such as in the mixed media on birch “Pandora Encounters Narcissus,” a comment on human duality. Rounding out the show is Jacob Meders of Warbird Press, a recent MFA graduate in printmaking whose original works often focus on the conflict between indigenous and Anglo cultures.