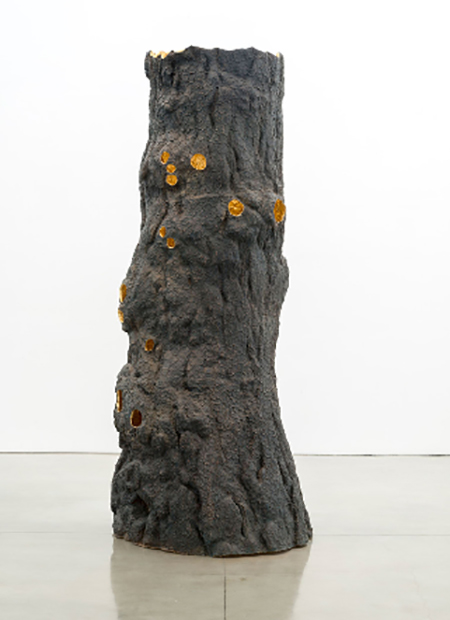 “Branches of Thought” is Italian artist Giuseppe Penone’s first major exhibition on the West Coast, and its ambition is at once modest and epic. Trees fascinate the artist: their form, their growth and decay. He clearly projects our being into theirs. Using drawing, photography, and sculpture, he reveals to us our own life through the tree and its parts. The series "Pelle di foglie" is made up of sculptures that resemble long branches found in the forest seemingly assembled by a passing stranger. The three here stand in delicate balance, the branches leaning or braced against one another. Despite the fact that the pieces are cast in bronze, they exude fragility, as if a gust of wind might knock them down.

“Anatomy” is a massive marble sculpture that stands 10-feet tall, a solid block of stone with a lacy intertwine of roots carved into one corner. “Spine d'acacia—Contatto, aprile 2006” is a spellbinding arrangement of glass microspheres and acacia thorns adhered to a large canvas. The pattern is reminiscent of a magnetic field of iron filings. The tour de force of this exhibition is “Door Tree-Cedar," a tree within a tree.  In the sturdy trunk of a very large cedar the artist has managed to excavate the heartwood within from the carved-out middle — the tree when it was a young and tender sapling. You can see how its skinny branches connect to the knots on the rough bark on the “mother” tree, and you suddenly realize that young trees are still inside old trees. Then we begin to think how we, too, retain the child inside of us. It’s a truth that is expressed so eloquently, so beautifully, and so directly. As Penone has said, “The tree is a being that memorializes the feats of its existence in its very form. Similarly, our bodies could be considered the sum of the performance of our existence.”