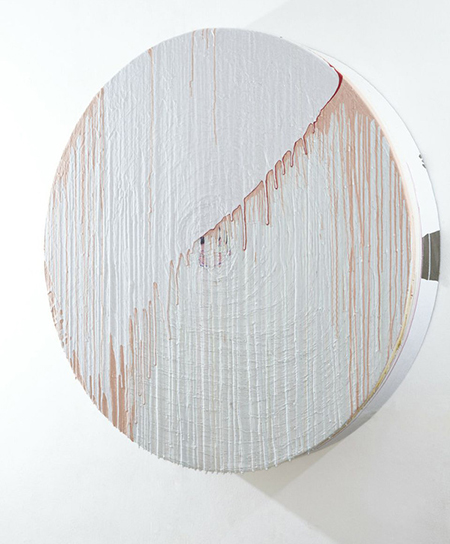 Portuguese artist Sara Bichão’s exhibition is an intriguing selection of idiosyncratic paintings, drawings, and small assemblages. The six large paintings in the show — half of which are circular, while the other half are composed of groupings of four roughly triangular blocks  — are made from polystyrene (also known as Styrofoam) that has been coated with fiberglass and concrete to serve as “canvases” for pale shades of acrylic paint applied in flat areas of color. Some of the pieces are embellished with drawings and drips of paint that cover the surfaces or enhance their broad edges. “Circular 1” is a round painting 51 inches in diameter and nearly eight inches thick upon which the artist has drawn a large chevron, as well as other shapes and shaded areas. Streams of flesh-colored, pale yellow, and gray paint cascade elegantly down the surface and sides. The fact that it is difficult to determine if Bichão’s shaped paintings are made from concrete or a similarly heavy medium, when they are actually very light, only makes them more intriguing.

Along with the large paintings, Bichão has created a wall installation of small objects using LEGO blocks from her childhood as well as found materials such as tissue, rope, denim, and wood. The LEGOs are cleverly fashioned into small sculptures, but the more fascinating pieces are fetishistic, like “Uh Uh La,” with its wrapped anthropomorphic shape, and “Burden,” in which a tiny, suspended lead plumb implies the weight of the world. “Umbrella,” on the other hand, appears so light and airy that it could float off the wall.

The oddest piece in the show, however, is situated rather low on the wall just inside the interior gallery. Composed of a single piece of string coiled around several nails to form a geometric shape that wraps around a corner, it signifies Bichão’s experimental approach to art and her refusal to be attached to any particular genre. Citing as influential three disparate American artists – David Lynch, Agnes Martin, and Matthew Barney – she has explored performance art, site-specific installations, and process art, all this by the young age of 29. Bichão brings an effervescent mix of energy and spontaneity, along with an undercurrent of ambiguity and mystery, to this body of work.