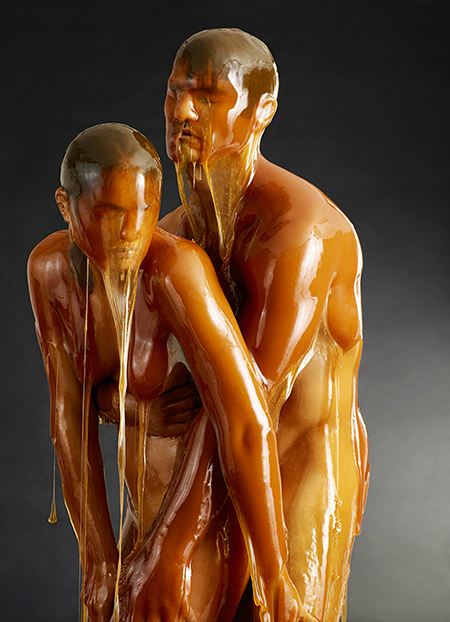 Blake Little's multiple-edition photographs of models glistening with, what ... resin? No, honey, it turns out ... are sensationally intriguing, nearly to a fault. First they raise the obvious questions: What? How? As the models are virtually submerged in this at-first-indeterminate substance, one will likely question whether they're in fact living, breathing individuals. Perhaps these are people who have been cast, sculpted into highly realistic, Ron Mueck-like objects; subsequently covered in cascades of resin; and then photographed while still wet? Rather, these are indeed real models, of all shapes and sizes, who have been covered in honey. The glistening quotient is extreme, the highlights nearly profound. In some cases, long, thin strands of the viscous sweet stuff sprout out from eyes or a chin in long, extremely thin strands. In others the honey gyrates like a jump rope in response to an apparent twist or shaking movement by the model. All that said, there's a shadow side to these images: through the course of the models' respective sittings/performances, a certain degree of sacrifice was endured, in a process similar to when one is cast in plaster. Then there's also the matter of the honey. Context isn't just necessary when addressing Little's project, but urgent. Here then are a few key points, as reported in Slate: During the shoots, Little used 1,000 pounds of honey per week; he recruited his models both through agencies and Craigslist; and in terms of endurance, according to the artist, "some people were able to stay in the moment for more than an hour, while others clearly wanted the process to be sped up." That sounds like an understatement. And a still unanswered question remains: what about the cleanup?