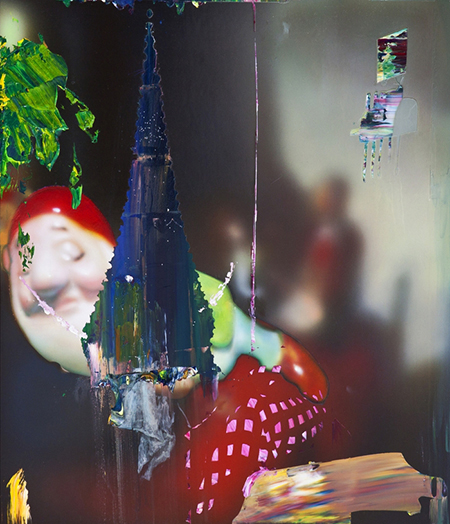 In "Candles and Lasers,” Tom LaDuke has upped his painterly factor significantly, pushing into gaudiness in the process. On paper, you have to give him credit for coming nearly full circle: his earlier bodies of work, from about a decade ago, were austere and tended to be monochrome. He’s now thrown a veritable kitchen sink of paint gestures, the most recent being the addition of glitter, into his arsenal. That's not to say LaDuke doesn't maintain a strong semblance of order, even elegance — such as it is — because he does (note the two restrained, contemporary classical sculptures typical of his oeuvre, for further underscoring of that). He continues to employ an overall structure of hazy, atmospheric airbrushed backgrounds and middle grounds of landscapes and spaces capes; but now he has carved, slathered and smeared patches of thick paint in an orchestration of calculated defacements.

“Chain," a 13-foot-wide painting combines Richter-like landscape patches, stalactites of blue-and-white paint smears, and an amorphous glistening multicolored blob near its center — it is the tour de force here. The piece is a panoply of visual information that keeps its order despite itself. Elsewhere though, you can't help but wonder whether LaDuke's inclination towards an over-the-topness, such as it is, only begins to make the work look a bit too much like a lot of calculatedly painterly painting that's already out there.