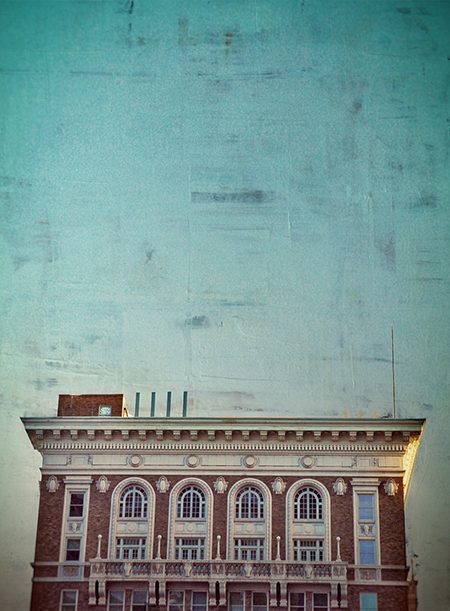 Phoenix is a photogenic city, believe it or not — from its legendary sunsets and dust storms to its cactus-studded peaks and motley assortment of Modern architecture. So it’s always a treat to see what photographers come up with — Chamber of Commerce glossies or views that are realistically grittier? Lisa Olson and Terry Pisel strike a happy medium, viewing their city through a quirky yet affectionate lens. Because both artists treat their hand-transferred photos with encaustic, the images manage to convey that drenching light and haziness that often settles over this heat-laden city, de-saturating its colors. In several of the works, the skies take on a textured, painterly quality, suffusing hints of green, yellow and purple. Just as noteworthy are the compositional styles, with both artists seeking unconventional perspectives and close-ups.

One of the most memorable images is Pisel’s “PFC,” in which the Phoenix Financial Center, a landmark high-rise notable for its computer card-like appearance, is captured against an aqua sky in such a way that it resembles a diving board against a pool. Similarly, in “Westward Ho,” depicting one of downtown Phoenix’s most iconic buildings, Olson concentrates on its radio tower framed by a surreal, charcoal-gray sky. Pisel’s “Luhrs Tower” also dwarfs the building against the sky. In other works, he captures under-appreciated architectural details. And such an Arizona-centric show wouldn’t be complete without images of the Grand Canyon (Olson), the red rocks of Sedona (Pisel) and city panoramic views (both artists), all of which subtly and satisfyingly defy the norm.