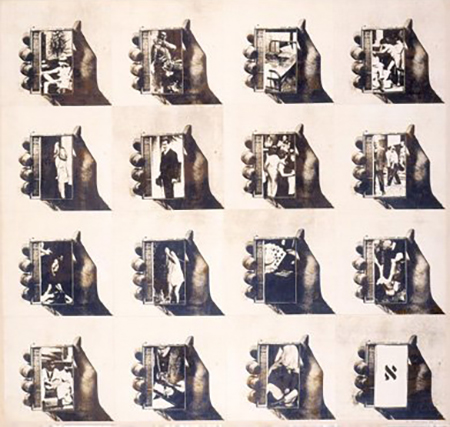 The rich history of drawing, specifically with respect to Los Angeles, is explored in two overlapping and interrelated exhibitions: Ed Moses, "Drawings from the 1960s and 70s" and "Drawing in L.A.:  The 1960s and 70s.” "Drawing in L.A." features works by over 50 artists whose approach to drawing range from the conceptual to the representational to the abstract. The exhibition surveys the range of drawing techniques, styles and methodologies that many artists began in the two decades during which the city first emerged as a key contributor to the international art world. That this show includes such a wide and varied range of male and female artists who worked in Los Angles during these years, including Ed Ruscha, Wallace Berman, John Altoon, Charles Gaines, Channa Horowitz and Eleanor Antin once upon a time would have come as a surprise, but no longer.

"Drawing in L.A." is a nice complement to the Moses' retrospective of works on paper from the same time. Moses has been exhibiting since the 1950s, so this exhibition traces how his ideas developed during his early prime, and reveal the degree to which the work of this period remains at the root of his current endeavors. Moses' interest in pattern and grids as well as his ability to reduce the observable to the abstract are showcased in the more than 90 works on view.