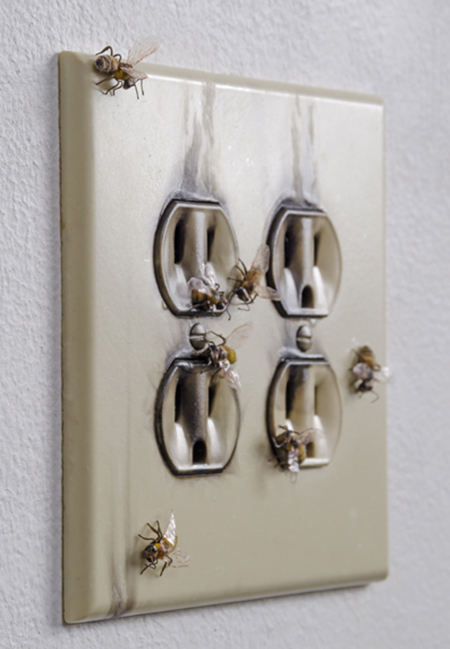 "Within the Walls" is a Sarah Perry tour de force using materials found in or inspired by  nature, and reworked into assemblage art pieces both hauntingly beautiful and unsettlingly surreal. One series is made up of humble electrical wall outlets — the kind you plug your devices into — which are shown at eye level. Only these have bees and spiders crawling in and out of the openings, creatures made by Perry with adept verisimilitude. In some, the outlets have burned out, with smokey patches above the openings. Others ooze a thick, translucent liquid, suggesting honey. The mind begins to conjure a background story, about how bees managed to get inside your walls and have now built honeycombs inside them. The outdoors has invaded your precious home, and it makes you queasy. Other works which echo this idea are “Wigglesworth: Phase One” and “Wigglesworth: Phase Two.” Here, millipedes, reworked from actual husks of millipedes, crawl in and out of old books. In a humorously self-referential touch, one is entitled “The Physiology of Insect Metamorphosis.”

There is much that is humorous, and also unnerving, in Perry’s juxtapositions of nature and human. In “Times Up” a dozen brass instruments riotously shoot out from a wall-mounted base. It seems very joyous until you approach and see that each opening is occupied with the snarling head of a cat, rodent, or other creature. Probably the most astonishing piece is “Take Me Home,” a birdhouse like no other. The “house” is made from an old metal can, with a circle cut from the side – the doorway perhaps. That entrance is made up of thousands of small bones arranged in a vortex. Perry gets these bones from owl pellets, pellets made up of things that owls eat but cannot digest, and is thus regurgitated. The pellets are made of the fur and bones of small birds and creatures. She carefully extracts the small bones and bleaches them, before using them in her work (Koplin Del Rio Gallery, Culver City).