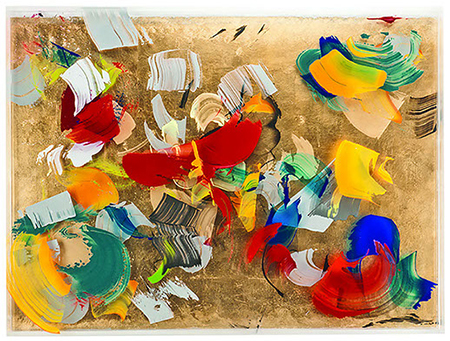 Danielle Frankenthal paints on both sides of multiple sheets of transparent Acrylite® (acrylic resin) panels before stacking them together and mounting them on the wall. She leaves a narrow space between each painted panel, however, which produces three-dimensional pieces that are all about light and shadow, color and movement. Her large, gestural brushstrokes are semi-transparent, allowing the viewer to see through the top layer to those below it. Consequently, each piece changes subtlety when viewed from various angles, adding an element of interactivity with the viewer.

Frankenthal’s style is influenced by abstract expressionism, and her spontaneous gestural brushwork captures the movement not of her wrist but of her entire arm. Bright colors and sometimes gilded surfaces shimmer and both reflect and absorb the light around them. The stacked multiple panels cast captivating shadows on the wall.

Han Hofmann relied on contrasts of color and other formal qualities to create depth in his paintings — a product of his well-known “push and pull” theory. Frankenthal has come up with her own clever technique to create spatial depth by separating layers of brushstrokes with air and light. Instead of simply suggesting depth and movement on a two-dimensional surface, she makes it literal. It’s an approach that engages the viewer actively in these exuberant, expressionistic paintings.