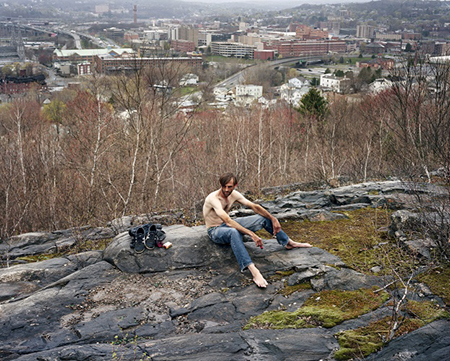 It’s hard to visualize how Americans and Canadians are seen by people in other parts of the world, but Thomas Gardiner’s photographs come closer than most to giving us an idea. The works in two of the British Columbia-based artist’s series, “Untitled USA” and “Western Canada,” depict rapturous landscapes and David Lynchian small towns inhabited by everymen and eccentrics.  Using 4x5 and 8x10 cameras, Gardiner traversed his native Saskatchewan and the Northeastern United States, capturing images simultaneously poetic and banal.

In one untitled print, a man skateboards down an unremarkable street; he and the street are in shadow except for a beam of honeyed, late-afternoon light illuminating his head and the tree branches overhead. In another, a shirtless, shoeless man, gaunt and pensive, sits alone on a hill overlooking a city. There’s a memorable image of two men and a woman at a sporting or camping event. One man sports a cowboy hat and a Speedo. The woman wears a bikini. Each man has a hand on one of her breasts. It’s a crude image, which many will find offensive and some will find humorous, but it’s pitch-perfect in its depiction of the sophomoric horseplay that passes for Sunday-afternoon entertainment in small towns across the continent.