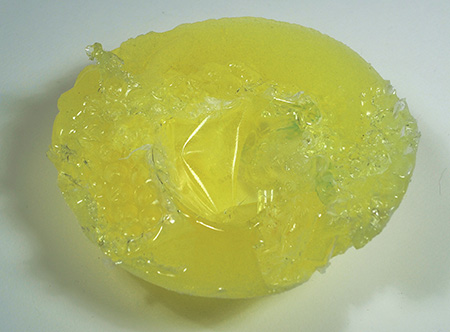 John Tallman offers a collection of small sculptural objects dating from 2007 to 2015. Seven intriguing objects ranging from 6 by 5 inches to 10 by 15 by 2 inches are spaced out on white walls and given ample space to breathe. The artist works with pigmented urethane casting resins that he pours into molds or over pieces of wood. His current process began years ago when he created a rubber mold of a 2005 painting. Then he used resin, plastic and plaster to create a series of casts from the mold. The paintings in the current show are made using the same process, but with a variety of different models. As with epoxy, two liquids are mixed together to create the resin, and atmospheric conditions determine the way it will react. Tallman enjoys the element of chance inherent in his medium and the resulting colors and textures. “Grutto,” for example is a shiny green blob with a bubbled surface. “Soft,” on the other hand, resembles a diminutive pink pillow. “I want objects that assert their visceral materiality yet don’t refer directly to a recognizable thing,” the artist said. He is also fascinated by the effects of light and space on his sculptures. There is nothing in the gallery to distract the viewer from the work, which augments their unusual shapes and surfaces.

Deb Covell's paintings presented in the adjacent gallery are mounted on pristine white walls with plenty of space. There are two medium-sized works (40 by 32 inches), while the rest are tiny, only slightly larger than three by three inches. Unlike Tallman’s work, these paintings are pure white rectangles. Made with acrylic and alkyd on panel, card, or masking tape, they are the result of the application of countless layers of paint. For all intents and purposes, “Seven Days” is composed only of paint on a base of masking tape, as the artist pushes her materials to the limit. Having been stripped down to their essence, the paintings are silent and contemplative, and the effect on the viewer is mesmerizing.