'The Outsiders'
at the Beatrice Wood Center for the Arts, Ventura County, California
Recommendation by Elenore Welles/Diane Calder 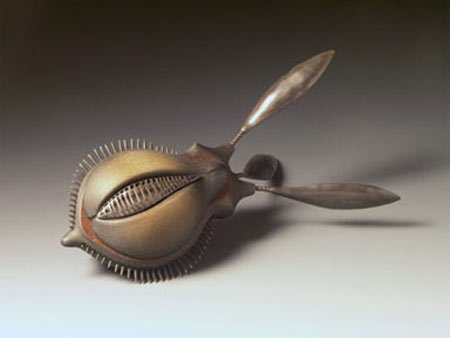 Reflections of the natural world and ecological concerns are manifest in an additional selection of four artists. Dianne Bennett is devoted to the re-use of found objects, salvaging materials such as old metal signs. Her painted Retablos are inspired by a sacred Latin American folk art tradition. Literally translated to mean “behind the altar,” the originals were intended to promote faith and belief. Bennett uses iconic symbols, text and visual imagery to question what in nature we hold sacred enough to sustain. Images of birds, trees, plants and endangered wildlife, such as the tri-color blackbird, allude to the need for land conservation. Louise Hibbert and Sara Parker-Eaton, in collaboration, re-create microscopic forms of organisms such as plankton and seeds. Hibbert uses sycamore and reclaimed pine, carving forms with a lathe and applying airbrushed inks and resins. The final touches come fromParker-Eaton’s application of silver and gold. Through a process dependent on the skill of each artist, the original materials are transformed into small objects of great finesse. In contrast, Shane M. Keena’s large multi-fired earthenware forms dazzle with their luminosity. An avid scuba diver, his forms reflect the influence of undersea life. They appear as strange, somehow familiar primordial creatures. Yet, they are hybrids that have been derived purely from the artist’s imagination. All four artists demonstrate how closely they observe the phenomena of nature, and in so doing convey an environmental message.

Years ago, the eccentric visionary, Reverend Howard Finster, claiming to have a direct line to the divine, predicted that young Kevin Wallace was destined to become involved in the arts. Today Wallace’s exhibition The Outsiders features work by Reverend Finster and half a dozen others whose primal gestures and direct forms of self-expression fascinate the current director of the Beatrice Wood Center. Finster’s intriguing hand lettered injunctions on cut wood simulate subjects such as Elvis and Coca Cola bottles, decked out with colors as bright as those printed on cereal boxes sweetened to captivate young children. More harmonious is the limited palette Mose Tolliver managed to coax out of any cans of house paint available to him. Also amazing are the birds, faces and flower imagery created by compulsive vernacular artist Sybil Gibson, who began her career at age 55, creating designs with tempera on brown paper grocery bags.