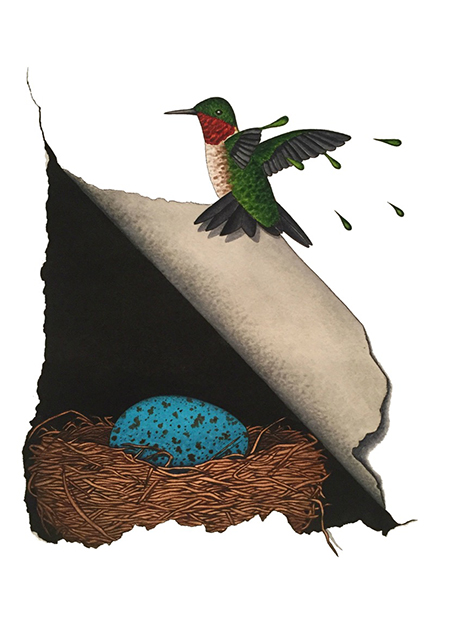 Daniel Angeles’ watercolors are not as lighthearted as they may seem. Building up thin washes, he creates pristine illustrations that reflect his personal experiences and emotions. Angeles refers to his work a journal of his life and emotions. For example, after his partner’s dog died, he painted its red collar surrounded by butterflies. Angeles’ primary influence is his deep love of flora and fauna; birds, butterflies, elephants, horses, bears, whales, goldfish, eggs and poppies appear in his recent work. In particular, hummingbirds and monarch butterflies inspire him, as they remind him of his childhood and represent people who have been influential in his life. In fact, nearly every painting in "Beneath the Surface" contains a bird or butterfly.

“Bulletproof” could be interpreted as a statement against gun violence. A handgun with a red poppy tied to the handle shoots out another poppy, while an exotic motmot bird defiantly faces the weapon. “Work in Progress” depicts an elephant holding a feather confronting a mechanical bird on wheels, while two butterflies hover above them, one holding a feather and the other a gear. The elephant appears to be making a peace offering to the bird, which may represent the industrialized world. In “Tales of Seasons Past,” hummingbirds and butterflies turn the pages of a book, and the leaves float up, turning into actual tree leaves that are changing colors as the seasons turn from summer to fall.

Angeles cites surrealism as an influence, and “Sky’s the Limit” suggests a Magritte painting. A ladder resting on two books leads up to a scrap of paper unfurling to reveal a blue sky filled with puffy white clouds. “Closing In” depicts a large blue-speckled egg barely fitting inside an open box, reminiscent of Magritte’s “Listening Room.” A butterfly pulling a horse by its bridle defies reality, and “Wind in My Sails” defies gravity with a hummingbird and a butterfly holding a sailboat aloft. There is something pure and innocent about Angeles’ watercolors, which provide a fleeting escape from the everyday world.