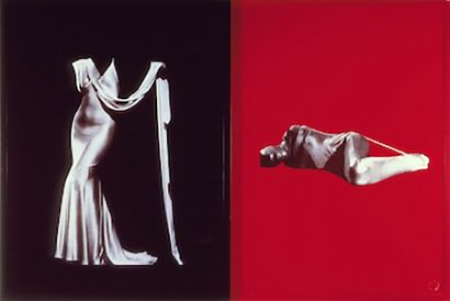 It’s been over a quarter of a century since Senator Jesse Helms’ condemnation of Robert Mapplethorpe’s “obscene” work lead to the cancellation of the Corcoran Gallery’s exhibition of the artist’s photographs, opening a discussion on censorship as a threat to artistic freedom. But the nature of some of Mapplethorpe’s imagery still raises enough controversy that “Physical:  Sex and the Body in the 1980s” was motivated perhaps to validate Mapplethorpe’s genre through an exhibition of work by two dozen seminal artists practicing in the 1980s who also dealt with issues of the body and sexuality in their practice.

This companion to “Robert Mapplethorpe, The Perfect Medium” is a little show with big implications [see Cathy Breslaw’s review in the June issue—Ed.]. Feminist disillusion with presentations of the female body exclusively as an object for the male gaze is counteracted by work from Laura Aguilar’s series “Clothed/Unclothed” and Judy Dater’s “Self Portrait, Salt Flats.” Sarah Charlesworth’s “Figures” addresses the sensual attraction of the human body as a lure in advertising, while Tina Barney takes viewers up close to a personal, affectionate moment in “Ken and Bruce.” The diversity of work shown here and it’s links to Mapplethorpe’s practice is further demonstrated in Mike Kelley’s “Torture Table,” complete with buckets, a knife and plastic pillow. In direct contrast is Brian Weil’s “Image Created to Eroticize Safe Sex for Education Purposes.”